Maureen’s Memories takes a spooky turn with this Halloween offering. Get ready for goosebumps – Maureen shares ghosts stories from her native Milltown, County Kerry and her present home in Massachusetts. The origins of our Halloween celebrations can be traced to Ireland. Maureen tells us about Irish traditions at Halloween such as barnbrack and bobbing for apples. Harry Houdini even gets a mention! Do you believe in ghosts? 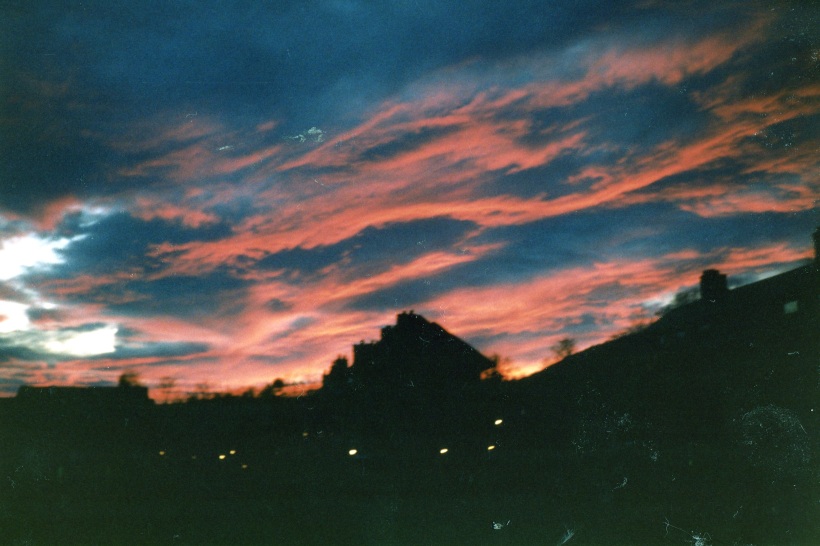 When I was child in Milltown, Halloween was very much a time of religious observance. We attended daily Mass but All Saint’s Day and All Soul’s Day were when we remembered all those who had passed away.

I don’t think we carved turnips, the original Jack-o-Lanterns, but “bobbing for apples” was one of the traditional children’s games we played.  A favorite Halloween treat was the chestnuts that we gathered from the nearby Kilderry Woods. Our Mam would roast the nuts in the hot coals of the hearth-fire.  We always ate Barnbrack, a fruit bread with a tacky gold ring baked inside. Legend was whoever got the ring would be married within the year.  As young children, that struck us as funny, being too young to be wed. We bought the brack from Miss Hannah Sugrue’s shop on Church Street, but it was probably baked at Larkin’s Bakery on Main Street.

A friend recently told me that when she was in her pram, over 80 years ago, her Mam wheeled her along the Killarney Road and up to the entrance where Billy Whelan’s Boreen stood. Right there, they came upon the apparition of a priest in old-fashioned cassocks, reading his breviary. But he never looked up to acknowledge them. Her brothers and sisters were so frightened they ran home, screaming all the way.  Their mother followed frantically, pushing the pram close behind.were so terrified of the ghost that they didn’t look up that road for over a month.

I once read a story of a parish priest who was so loved in Milltown that he was buried a total of three times. He was transferred to and died in North Kerry, but was beloved by the parishioners of Milltown because he was so good to the poor. They clandestinely disinterred and reburied him in Milltown, but the people of North Kerry came and took his remains back to North Kerry and reinterred him there.

Another friend tells the story of the haunting of her family farmhouse just outside of town. Her sister lived alone and, almost every night, while she sat by the fire, she saw a ghostly figure in the kitchen window. Sometimes she even heard the sound of horse-hooves when she saw the spooky specter. This went on for quite a while before the culprit was finally caught and literally uncovered. It turned out it was a neighbor wearing a white sheet who wanted to scare her off and buy the land. He wore bed-sheets and stood at the window every night trying to scare the living daylights out of her––and very nearly succeeded.

Once, when my son, Will, was visiting a friend in upstate New York I was home alone. In the morning, I went downstairs only to find that the front door that I’m certain I locked was wide open. Will’s friend was Walter Gibson, the creator of the pulp-fiction character, “The Shadow” a fellow magician and friend of the famous Harry Houdini. Walter also ghost-wrote some of Houdini’s books.  Gibson was known to attempt to contact his friend Harry by séance on Halloween, but never made after-life contact. But  there I was, home alone and on the next morning I calmly started down the stairs, this time certain I’d once again find the door open. Two days in a row the front door was not only unlocked but opened-wide when I was certain I’d locked it up tight, being by myself for a few days.

The man who sold us that house was the only remaining member of his family. He told us that he was happy to sell to a family with children and that he had turned down better offers from single people. The first night we lived there was a very hot August night, with barely a breeze of fresh air to be found in the old house. However, we hardly slept a wink as the doors kept slamming all night long! Later, we often would hear footsteps during the night no matter what floor we slept on. Neighbors subsequently told us that the 1880s-era home had been vacant for several years before we moved in, and that it had a reputation of being haunted.

We kept in touch with the previous owner throughout the years, so I knew that his brother, Warren, died in the hospital from heart disease as a young man. Once, in the 1970’s I picked up my phone to make a call and heard an exceptionally clear “crossed-line” conversation. As distinct as a bell, I heard Warren and his parents talking. The call ended when both of his parents said, “Good-bye. I love you, Warren.” Warren replied: “I love you too, Mom and Dad.”