Over the past twenty-two years I have visited Ireland six times, and it wasn’t until my last trip in 2009 that I actually spent time with my Irish relatives.  My heritage is completely Irish, but I was always hesitant to establish a connection with my Irish relations.  While this attitude may have its roots in a general feeling of shyness, it was cemented by experiences I had in Ireland.  I was content to remain a casual visitor who had a great time in Ireland and leave the sentimental homecoming production to other Irish Americans.

Two examples of encounters I had in Ireland explain why I chose to forgo the pursuit of my Irish family.  The first occurred during a visit to Ireland when I was sixteen-years-old on a summer program for American high school students called The Irish Way.  On a free day from classes, I  accompanied a friend on a day trip to visit her relatives who lived in the village where her grandmother was born.  My friend was anxious and excited to meet her relatives, the family of whom her grandmother spoke so fondly.  The entire situation made me nervous, but I was only a spectator. 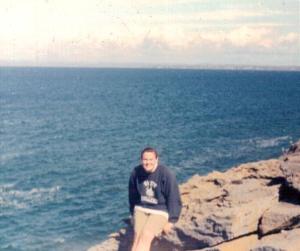 Sixteen and somewhere in Galway in 1988

The afternoon was a complete disaster.  Meeting the family did nothing to calm our nerves.  They weren’t rude, just not very  friendly, and for some reason they seemed suspicious of us.  We both felt uncomfortable, unwelcome, and overly scrutinized.  There was no connection; no family chemistry.  My friend was disappointed and hurt – she had expected a warm welcome by people just like her grandmother, but instead received the cold shoulder.

The second encounter that stayed with me was a conversation I had with a wonderful woman from near Belfast.  We were chatting one evening at the Nesbitt Arms Hotel in Ardara, County Donegal.  She told me that Irish people dread the sight of Americans on their doorstep, searching for their grandmother’s birthplace, or trying to locate cousins they hadn’t heard from in years.  I can hear her saying with a laugh, ” You hear the doorbell and look out and see a couple of Americans in their khaki pants and runners, looking so pleased with themselves…”

I certainly did not want to be one of those Americans, nor did I want the disappointment of meeting my relations only to have them be disinterested, unfriendly, and annoyed.  So, I remained content to visit Ireland, have a fantastic holiday, and leave any notions of locating relatives to my imagination.

I provided the background so that you might better understand why I was caught off-guard by the Week of Welcomes (to steal the phrase from the pilot program described here) my family experienced in 2009 when we visited Ireland.  Actually, it was nearly three weeks of great times with relatives and friends all over Ireland, but I will begin with the warm welcome offered by the McCormacks of Ballyedmond, County Laois.

Our week was punctuated by two great parties – one at the beginning, and one at the end.  My father, mother, aunt, sister, and I arrived at the home of Jimmy and Helen McCormack late in the afternoon on Saturday and immediately received ribbing for our late arrival.  My father had done extensive genealogy research and had reconnected with the McCormacks in Ballyedmond about ten years prior to our visit.  Irish Jimmy and my father Jimmy are second cousins – their grandfathers were brothers. 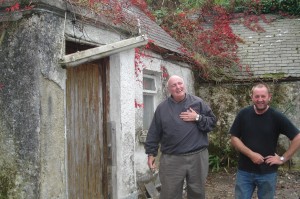 The Jimmys having a laugh outside the old house in Ballyedmond

Read the story of our parties with the McCormack clan here.  In my next post, I will share the details of our week with the McCormacks, including a trip to their local, a tree-planting ceremony, and what I learned along the way.

16 thoughts on “Week of Welcomes: McCormack Style, Part I”