I have exchanged emails with Margaret from County Galway regarding her American relatives.  When I first heard from Margaret, I thought her request was fairly standard: she was looking a relative, Catherine McLoughlin Dempsey, who was born 1887 in Coolcalliga, Moylough, County Galway and emigrated to the US.  Catherine and a daughter returned to Ireland for a visit in the 1960s.

I was easily able to find Catherine by doing an Ancestry.com search.  In addition to the census and passenger list data, there was a family tree that had been submitted by an ancestry.com user.  This family tree included Catherine McLoughlin Dempsey with the exact birth date and place.  I have attempted to make contact with the author of the family tree, but as yet have been unsuccessful.

Margaret was quite pleased to learn about Catherine’s life in America, but she wanted to learn if there were any surviving members of the family.  You see, Catherine’s mother, Margaret Clancy McLoughlin, is buried in Moylough without a grave marker.  Margaret (also Margaret Clancy before she was married) had hoped to locate a direct descendant who might help remedy that. 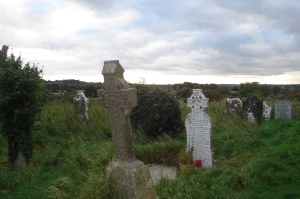 An Irish Cemetery (not in County Galway, but County Kildare) - photo by Regan McCormack

I am competent in historical research, but tracing living people is another story.  I found a Dempsey in the Long Island town where Catherine died, but when Margaret contacted him she learned he was a recent arrival to the area and unrelated.

There are more of Margaret’s relatives I have yet to fully research, but I was thrilled with the information on them that Margaret shared.  Here is a portion of her email:

Nora  Clancy  married an O.Hara They had 2 children (may have been adopted) mary and ?John I think he was in the Korean war AS were the Coogans .Their mother wasCatherine or maybe Kate .Her husband was from Kilkerin CoGalway  we prayed for them every night after the rosary in what we called Trimmings  They were known as:” The boys in the War.”4 of the Coogans visited Ireland late sixties or early seventies ,no one seemed to have exchanged addresses!!!    we also had Nellie clancy married Nick guerin ;They lived in Fortlauderdale on retirement.and Ive a faint recollection of Posting mail to:Flushing Newyork. ;where they had a sister Mollie  never married,She sent me 100 dollars when I got married in 1967!!! . There was a brother James  died 1952 I think,He wasnt too popular with the sisters… He never came back to Ireland, I think Nellie was the only one to visit,She was  returning to the states when the Lusitania sank,I remember finding an old letter when my aunt died and reading about the debris floating on the sea!

Margaret provides many interesting details, but I especially liked the bit about how they prayed for the “Boys in the War” each night after the Rosary.  She has so much information on these relatives.  I will trace these relatives and share the results here.  In the meantime, maybe someone will read this with ties to these Clancy siblings…