Guest contributor Jim McCormack shows us how family history research can lead us in unexpected directions.  Jim’s research has extended from his direct lineage to learning about the earlier wave of McCorma(i)cks who came to America – the families of his grandfather’s uncles.

One of the fun aspects of family history research is you often get sidetracked by interesting stories or people. A good example involves my study of the family of Patrick McCormick. Patrick was one of my grandfather’s uncles and an early settler in Camden Township, Carver County, Minnesota. Patrick and his wife Catherine Glendon had a total of fourteen children. My search for Andrew Francis, the couple’s sixth child took me from Carver county Minnesota to the mountains of Tuolumne California where he died in 1911.

Andrew McCormick was born in 1864 and was a graduate of the State University Law Department. The promising young attorney was tall, handsome, and athletic.  On July 10th, 1894 Andy was married to the lovely Belle Hagen, the best known and popular young lady in Camden.  Within three years Andrew had uprooted his young family and taken them to the gold fields of California. By Jan 1st 1911 Andrew was dead and Belle was responsible for raising their five children. My search for Andrew (which I will discuss in a later post)and the California branch of the family introduced me to a cousin in California Rosemary Arca. Besides sharing many stories of the family, she graciously shared treasured family photos. Among those were photos of Belle Hagen McCormick, Belle’s mother Ellen Sweeney Hagen and a photo that I think is of Isabella Sweeney Ellen’s mother. Whether it was the similarity with my own mother who was left a widow with young children to rear or all of the feminists in my family or seeing these photos, I began to dig into the Belle Hagen McCormick story. 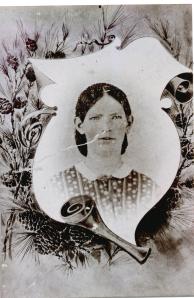 Isabelle (Belle) was born in 1870 to Ellen Sweeney and Peter Hagen. She was the second of three children born to the couple. According to Peter’s obituary Ellen died in 1874. In the state Census of 1875 Peter and the three girls were living as a family in Carver. By 1880 the three Hagen girls were living with their Grandmother Isabella Sweeney and their father Peter had been committed to the State Hospital in St. Peter, Minnesota. Luckily for Belle she had a loving grandmother to raise her after the two terrible losses of her youth.  One can only speculate on how she was affected by her mother’s death and father’s mental problems. In 1885 Isabelle Hagan was living with Grandma Sweeney with no sign of the other two girls.

Despite these early setbacks Belle apparently adjusted quite well. Prior to her marriage to Andrew, Belle was known as one of the most popular young ladies in the County.  Newspaper accounts of the time described the wedding as almost fairy tale like.  The Norwood Times described “a very impressive ceremony complete with flowers and wreaths decorating the church in Norwood.  The Times reported that the bridesmaids were Misses Margaret McCormick, sister of the groom and Mary E. Hagen of Ft. Snelling, sister of the bride. The groomsmen were Philip McCormick, brother of the groom and Daniel Sharon, a cousin of the groom (and boyhood friend).  After the ceremony a sumptuous repast was served to the family and relatives at the home of Senator Craven.  After their wedding tour the prominent young Chaska attorney and his beautiful wife took rooms in a trendy new addition in Chaska.”The honeymoon apparently did not last long. Within three years Andrew Belle and Lenore their first child had moved to California. By the time Andrew died Jan 1st 1911 the family had grown to five children. Sometime that same year Belle married Lott Walker Savage in Tuolumne. In Oct 1912 their daughter Francis Ellen was born. At some point after 1920 the blended family moved to Oakland where the family remains today.

Please leave a comment if you would like to ask Jim a question.  He will share a bit more about Andrew McCormick in a future post…make sure you check back!

3 thoughts on “Belle of the Ball”