Jim takes a moment to reflect on family, genealogy, and Ireland…

Ireland occupies 27,136 square miles of Mother Earth’s surface. As of 2011 about 4,581,269 people inhabit that area. As a comparison Minnesota, where I live in the United States has about 5,200,000 folks spread over about 86,934 square miles. Just how small was illustrated by an encounter I had on a recent trip to the homeland.

One of my goals on that trip was to meet the members of the Loughman/Kelly branch of my McCormack family tree. My grandfather’s youngest sibling Johanna McCormack who was born at Ballyedmond, Queens County (now Co. Laois) in 1874 married James Loughman from Killadooley in 1904. For many years Aunt Johanna, as she was called, corresponded with my aunt Nellie McCormack Marrin in Minneapolis. Johanna’s daughter Catherine Loughman, who would later marry Tom Kelly, continued the correspondence with my Aunt Nellie. As part of my search I had acquired several photos taken of family in Ireland when my cousin Eileen Hamm Garding had visited in the mid 1970’s. I had already identified the people in most of the photos. I was however stumped by a photo in which the only two of seven people pictured that I knew were Eileen and our cousin Kate Loughman Kelly. On my second day in Ireland I met Michael Kelly, Kate and Tom Kelly’s oldest son. The way that meeting came about is a story to be told another day. For our purposes today let it suffice to say that Michael was easily able to identify the other people in the mystery photo. 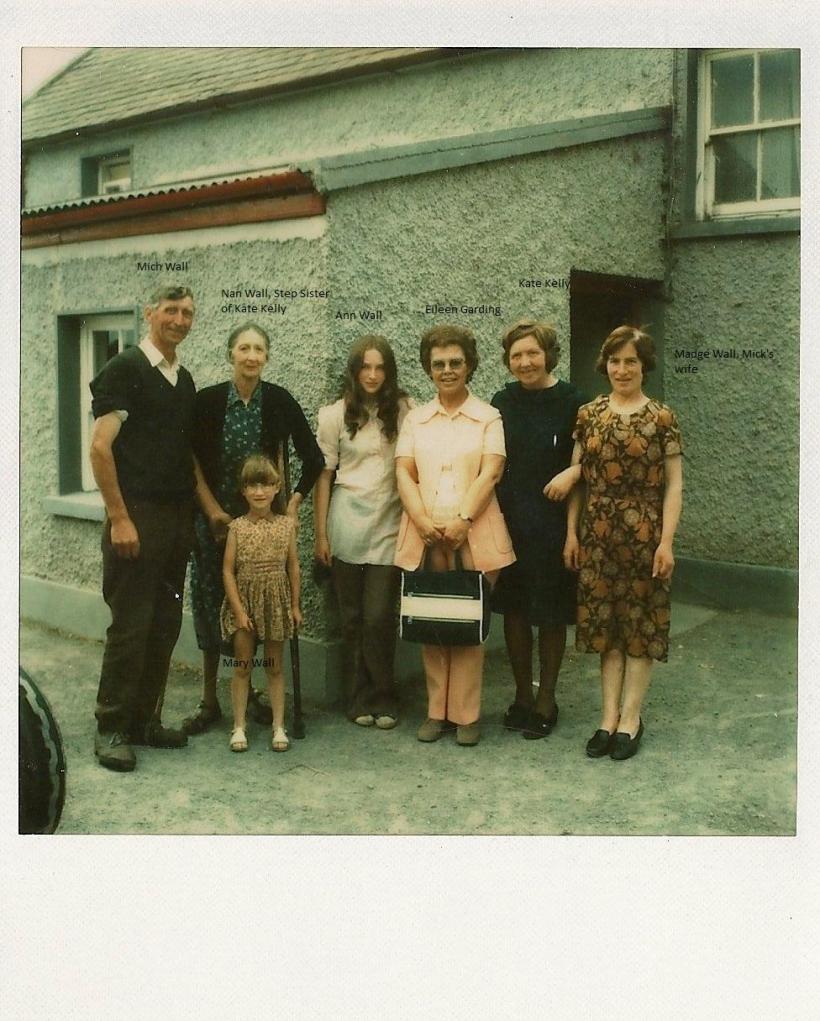 They were Nan Loughman Wall, Kate’s stepsister, Nan’s son Mick, his wife, and their two daughters. The names are only important because of what happened next. 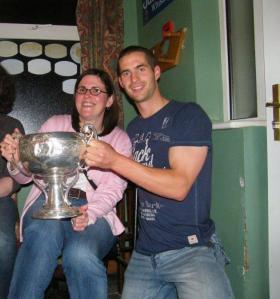 Two nights later my family and I were attending a victory celebration in a pub in Clogh. It just so happened that the Hurling team from Clogh/Ballacolla had recently won the County Laois Championship. The reason we were at the party is that another cousin Johnny Delaney was the captain and star of the team.

While enjoying the celebration at the pub I was introduced to a fellow named Mick Wall. The name sounded familiar but I could not place it. I do have about 1700 names in my family tree. After a few minutes it started to come to me. I asked him if his parents were Mick and Madge. Sure enough he was the son of the family in the mystery photo that had just been identified two days earlier. Where but in Ireland could a Yank from St. Paul Minnesota be celebrating with the team captained by a cousin in one of the smallest hamlets in the County run into the son of a man on the mystery photo?