I know I am not the only family historian with dreams of discovering a cache of old letters, hidden away in a dusty attic. These letters would answer all my questions and lead me to finally solve the mysteries I have pondered about my ancestors’ lives.

Well, this has not happened. In fact, my research seems to lead to all sorts of letters from and to everyone but my family! Reading these letters is fascinating, and they provide a ton of contextual information, but can they really be as good as the real thing?

For example, I came across several letters from Stephen Owens , a nineteenth-century Irish immigrant to Clontarf, Minnesota, to a niece back home in Skerries, County Dublin, Ireland.  The letters are in a file at the Swift County Historical Society. The letters were shared by Kerby Miller, professor of History at the University of Missouri and the preeminent authority on Irish emigration (see his book Emigrants and Exiles.)

The first letter in the collection is dated December 4, 1899. Mr. Owens is about seventy-years-old, has been in the United States for over fifty years and is very happy to have received a letter from his niece back home in Skerries. He writes, “I Thought I would never hear from my friends in Skerries again…”

Mr. Owens goes on to describe his family and his community. Here’s an excerpt:

I am pretty smart on the foot yet thanks be to God. Your Aunt don’t hear so well as I do, She is Pretty Old Looking. She is Able yet to do our Cooking and washing. We had to give up farming we were to old to work the farm any Longer So I sold it and moved to the Little Town of Clontarf near the Church… 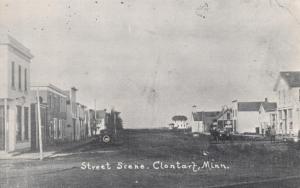 More than fifty years have passed since Mr. Owens left Ireland, but he still asks about old school friends, neighbors, and family:

When you write again Let me know iff your Uncle Michael Owens wife is living in Skerries or Daughter. Remember me to John Baulf and to James Russel the Shoemaker and his Brother Mathew and their sister Margret iff Living. All my Old School Mates I suppose are nearly all Dead, iff I landed in Skerries now i would hardly no one Person in the Town the would all be new People to me  my Generation are all Passed away Well Dear Niece Ceila I wont forget you night & morning in my Poor Prayers and I hope you wont forget your Old Uncle…

On March 19, 1900 Mr. Owens writes to his niece and thanks her for the shamrock she sent him. He goes on to describe the large St. Patrick’s Day celebration in Clontarf, and wagers that, “yous did not celebrate like this in Skerries.”

Mr. Owens has this to say about the Boer War taking place in South Africa:

We are all Irish to the Back bone out here and all Boer sympathizers out here. We are sorrow to hear of so many of our countrymen being slain in the war…the English will give them the Post of honor on the Battle field, but won’t give Home Rule.

In the letters Mr. Owens shares much with his niece about his American hometown of Clontarf, Minnesota. He talks about Church activities, the priest, and building projects in the town. When Mr. Owens says “We are all Irish to the Back bone out here and all Boer sympathizers…” I realize he is speaking of my ancestors – his neighbors in Clontarf and all fellow Irishmen who helped establish the community twenty-five years earlier.

So maybe my great-great-grandfathers Patrick Foley, John Regan, and Francis McMahon were Boer supporters, too? Clontarf was a small town, I imagine they all ran in the same circle – St. Malachy Catholic Church, the Hibernian Hall, McDermott General Store…actually there probably was just the one circle!

So, these letters were not found in a relative’s dusty old attic, nor do they even directly reference my ancestors. But they are the next best thing to finding my own family’s letters. It is often the small discoveries that keep family historians and genealogists going.

I will feature a few more excerpts from the Owens Letters in a future post. There are plenty more insights to the Irish experience in America that this nineteenth century Irish immigrant has to share!

One thought on “The Next Best Thing”