Can’t believe an entire year has passed since I posted this in honor of my great-grandmother’s birthday last year. Hope your 2013 is off to a good start — thanks so much for reading. Now, better get to baking that spice cake…

Minnie was my great-grandmother, and according to my grandma she absolutely hated the nickname “Minnie”. Please forgive me, Great Grandmother, but I think it’s cute, and since your real name Mary is shared by at least 75% of the women in your family tree, I chose to call you Minnie.

Minnie Foley was born in Fisherville, New Hampshire on January 2, 1875. She was the fourth of five children born to Patrick Foley and Mary Crowley (their eldest son did not survive infancy.) Patrick emigrated to the United States from Kilmichael, County Cork in 1864. Mary came a year earlier in 1863, also from County Cork.

Minnie was baptized on January 24, 1875 at St. John the Evangelist Catholic Church in Concord, New Hampshire. John Foley and Mary Casey were her godparents.

Three years later, Minnie and her family moved west to Clontarf, Minnesota with several other Irish families from the Concord, New Hampshire area, including the Regan family. John Regan and Patrick Foley emigrated together in 1864 from Kilmichael. The families settled on farms in Tara township. Minnie and Nellie Regan were best friends from a very young age.

First-Generation American Girls: Minnie and Nellie in about 1886

My grandma told me that Minnie worked hard her entire life, and that included working on the family farm in Tara Township while she was growing up. Her sister Maggie worked inside, while Minnie and her younger brother Jackie worked outside. My grandma confessed, she wasn’t sure where Minnie’s older brother Tim worked!

The McMahons, an Irish family from County Fermanagh, lived about a mile from the Foleys in Tara. Minnie married Thomas McMahon at St. Malachy Catholic Church in Clontarf on June 28, 1904. Minnie’s sister Maggie and Tom’s brother Frank were their witnesses. I imagine Minnie and Hoosie (Tom’s nickname in Minnie’s autograph book) having secret meetings over hay bales and missing chickens during their courtship…

Minnie and Tom raised seven children and after giving farming all they had the McMahons moved to Minneapolis in 1925.

When she died in 1945, Minnie was living with my grandma, her husband John Regan, and their new baby (and my mother) Eileen. My grandma said that Minnie was smitten with Eileen. Minnie would say that she had never known a baby to sleep as much and as well as little Eileen. Minnie marvelled what a good baby she was, and how Eileen would even fall asleep with a bottle in her mouth.

In many ways things came full circle for Minnie. Also living with my grandma in 1945 was Neil Regan, Nellie’s older brother and my grandpa’s father. Eighty years earlier Patrick Foley and John Regan had journeyed to the United States. After Fisherville, New Hampshire and Clontarf, Minnesota, the families came together again in Minneapolis…a long way from Kilmichael.

In my grandma’s recipe book are a few recipes attributed to Minnie, her “Ma” – I think I will make “Ma’s Spice Cake” in Minnie’s honor today. 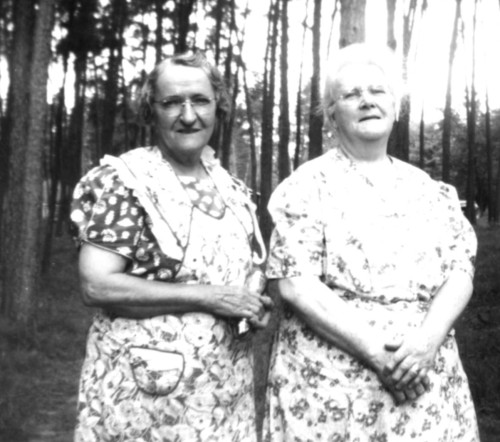