Readers of this blog may be aware of President John F. Kennedy’s Dunganstown, County Wexford roots. President Kennedy went home to Wexford for a visit in 1963. But Wexford’s connection to America does not begin and end with Kennedy. The Father of the American Navy, Commodore John Barry was a Wexford native. A new book exploring these connections, and more, was recently published by the Wexford Borough Council. Please read the following press release for more information. Click here for a sample of the great photography in the book and to read the forward by the Mayor of Wexford, Councillor Jim Allen.

Recently a new book entitled Wexford – The American Connection was launched by the Mayor of Wexford, Councillor Jim Allen to commemorate the 50th Anniversary of the visit to Wexford town of President John Fitzgerald Kennedy in June 1963. It is published by Wexford Borough Council as part of this year’s commemoration in the town. The book is copiously illustrated with photographs from the Denis O’Connor Photographic Archive and other local and American sources.

In-depth articles cover the United States Naval Air Station at Ferrybank, Wexford which operated five Curtiss H-16 flying boats in the final weeks of WWI in a bid to combat enemy submarines operating off the Wexford Coast. Under Lieutenant Commander Victor D. Herbster the Air Station was a veritable ‘small town’ on the outskirts of Wexford and was one of five such stations in Ireland during the 1914-1918 war. On completion of the station it served as home to 406 service men and 20 officers. 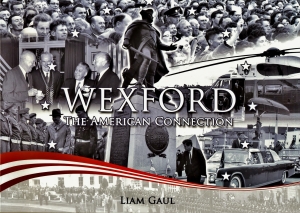 The young John Barry from Ballysampson, near Tacumshin sailed from Wexford as a ship’s cabin boy. After some years at sea, he finally settled in Philadelphia. With the outbreak of war between the Colonies and England, Barry was given the task of outfitting the first Continental Navy ships. He received a captain’s commission in the Continental Navy dated 7 December 1775, signed by the President of Congress, John Hancock. Having commanded several warships and fighting many battles both at sea and in the land war, John Barry fought the last battle of the Revolution on 10 March 1783. President George Washington appointed Barry as Commander-in-Chief of the new Navy of the Constitutional United States of America. Commodore John Barry is known as the Father of the American Navy.

Over the years, many efforts were made to honour Commodore Barry in his own native place and in September 1956 the President of Ireland, His Excellency Sean T. O’Kelly unveiled the magnificent bronze statue of Commodore Barry at Crescent Quay, a present from the people of America to the people of Ireland. The statue is the work of American sculpture, Wheeler Williams and was shipped over to RosslareHarbour on board the destroyer, USS Charles S. Sperry. On 27 August 1962, former American President, Dwight D. Eisenhower, made a brief visit to Wexford on a very wet and windy day to place a wreath at the Barry Memorial. It was President Eisenhower who brought the project of a memorial to fruition following many years of discussion and the intervention of WWII which put this idea into abeyance.

As part of his visit to Ireland President John Fitzgerald Kennedy visited CountyWexford and the ancestral home of his Irish grandfather at Dunganstown, New Ross followed by a visit to Wexford town where he was conferred with the signal honour as an Honorary Freeman of Wexford. Prior to this public ceremony at Redmond Place, President Kennedy paid homage to one of his maritime heroes, Commodore John Barry, Father of the American Navy, a navy to which President Kennedy had served as an officer.

The links forged between Wexford and the United States of America began with Commodore John Barry in the eighteenth century. These links are still vibrant today through the association with Wexford town’s sister city of Annapolis, Maryland home of the United StatesNavalAcademy. The Naval Academy was founded in 1845 on the site of Fort Severn, and occupies an area of land reclaimed from the Severn River next to Chesapeake Bay. Annapolis has been visited by several of Wexford’s Mayors over the years including the present incumbent, Mayor Jim Allen. Written by historian, Liam Gaul, this special commemorative book is available at the following costs including p&p Eire € 23.00, U.K. £ 22.00, and U.S.A. $ 33.00 payable by cheque to: