Vincent Carmody of Listowel, County Kerry left the following as a comment here on the blog. I thought it deserved to be seen by all followers of The Irish in America, not just the dedicated comment-readers! 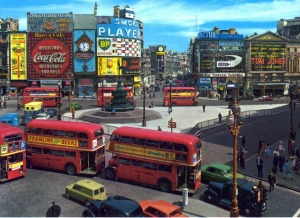 I was a young man just over in London from Ireland in 1963. I went over in October, the following 22nd of November a work colleague and myself attended a showing of the film, Tom Jones, at the Odeon in Leicester Square. During the showing some people who had come in and sat nearby mentioned that they had heard rumours of President Kennedy been shot.

After the film we were in a pub, Wards of Piccadilly.  At this time news of the shooting was both on Television and in everyone’s conversation. Leaving the pub, the news vendors were selling their first edition with the news of the shooting.
As we rode down the second escalator to the Piccadilly tube platform, we came across a woman who had fainted, her boyfriend who was with her asked us to help. Together we moved her to a bench on the platform, by this time she had recovered, her boyfriend (Jack Shaefer?) told us that he was a marine working at the US. Embassy and that she had been overcome and upset when she heard of the shooting.

We traveled home together and they spoke of Jack’s tour of duty ending and of their return to Pittsburgh. The next I heard of them was nearly a year later when I received a small packet from them  which contained 4 Kennedy Dollar coins. After that we corresponded  for some time, however when I returned to Ireland a couple of years later we lost touch. All of that was over 50 years ago but the memories remain.

Impressive memory, Vincent! I wonder what ever happened to Jack Shaefer and his girl? Maybe someone from Pittsburgh knows????

Vincent also had this to say:

Some of your readers might be interested in looking up the website of a book which I had published last year, it is a social history of my hometown of Listowel. It has got some great reviews. The book’s name is, Listowel, Snapshots of an Irish Market Town, 1850-1950,  the books website address is, www.listoweloriginals.com.

This is not the last we will hear from Vincent. In the coming weeks, he will share a couple of excellent articles with The Irish in America. Vincent has written about relatives and Listowel natives, and their experiences in America – Chicago politics, US Presidents, and more. Great stuff!

And stay tuned for another great giveaway in March, just in time for St. Patrick’s Day!