October 24th is the 185th anniversary of my great-great-grandfather John Regan’s birth.

John Regan was born in the townland of Clashbredane, Kilmichael, County Cork, Ireland on October 24, 1829. His parents were Cornelius and Ellen (Foley) Regan, and his godparents John Connor and Johanna Regan. John was the fourth of ten children, the second son.

When I first looked into John’s story, I was struck by how he never provided an accurate age when asked for it. Be it a ship’s officer, a census-taker, a priest, or a city clerk – never did John report his real age. John did not know how to read or write. English wasn’t even his native language. He could have not understood the question, but I have a hunch John thought his age was his own business.(I will always note his real age.)

In 1864, John arrived at New York harbor aboard the City of Baltimore. He is listed as a 24-year-old laborer (34). The names John Regan, Patrick Foley, and Timothy Galvin appear consecutively on the ship’s manifest. My grandma Agnes McMahon Regan always told me that John Regan and Patrick Foley came to America together from County Cork, that their families were close in the old country. According to John’s birth record, they were more than friends, they were cousins. Was Timothy Galvin an old friend from Ireland or a new friend from the ship? We will never know.

Once in the United States, Regan and Foley made their way north to find work in the jobs-rich industrialized Concord, New Hampshire, while Galvin went west and farmed in Illinois. Thirteen years later the three Irishmen would be reunited and among the pioneer settlers of Tara Township in Minnesota.

The 1870 United States Federal census lists an unmarried laborer John Regan, age twenty-five (40). He is living with seventy-year-old Ellen Regan, his mother. I wonder when Ellen joined John? Maybe she came with his younger brother Jeremiah, who also settled in New Hampshire? The 1870 census record is the only mention I have found of Ellen Regan in America.

The photo above is an old tintype and the only one I have of John Regan. I believe it was taken about the time of his marriage to Mary Quinn on May 19, 1872. The couple was united in Concord, New Hampshire. John was twenty-eight (42) and Mary was twenty-five.

Three children were born to John and Mary in New Hampshire – Cornelius, Ellen, and Patrick – while John worked at a local machine shop. By 1878, the Regans had saved enough money to move from the crowded city of Concord, west to Minnesota. On August 17, 1878 John Regan purchased 240 acres in section 7 of Tara Township near Clontarf, Minnesota for $1,745.24.

John added to his family and his land holdings over the next ten years. Three more children were born – John, Jeremiah, and Mary. John’s wife Mary died of consumption on June 17, 1895 at the age of forty-nine. Their youngest daughter Mary was just eight years old and John was fifty-six. By this time John had amassed over 600 acres in Tara Township.

John continued to work hard on the farm until he sold his holdings for $31,650 on April 1, 1913. John must have seen his son Jerry as most likely to succeed him in farming, or perhaps most in need of his help. He purchased a section of land once owned by his old friend Timothy Galvin. John built a lovely two-story home which dominates the flat landscape of Tara Township to this day. John spent the rest of his life in this house. He died on January 21, 1924 of pneumonia. His death certificate says birth date was unknown, but age estimated at ninety-years-old (94).

Francis Byrne, a grandson of John, remembered only a gruff old man nearly blind with cataracts, but his mother told him stories of “Old Johnny”. He was tough as nails and fiercely independent. When the local postmaster and general store proprietor tried to tell Old Johnny how to vote, he defiantly went the other way. He was a determined man who kept to himself.

Even in the end, John’s age was not recorded correctly. After years of claiming to be younger than his real age, John’s gravestone says he is two years older. 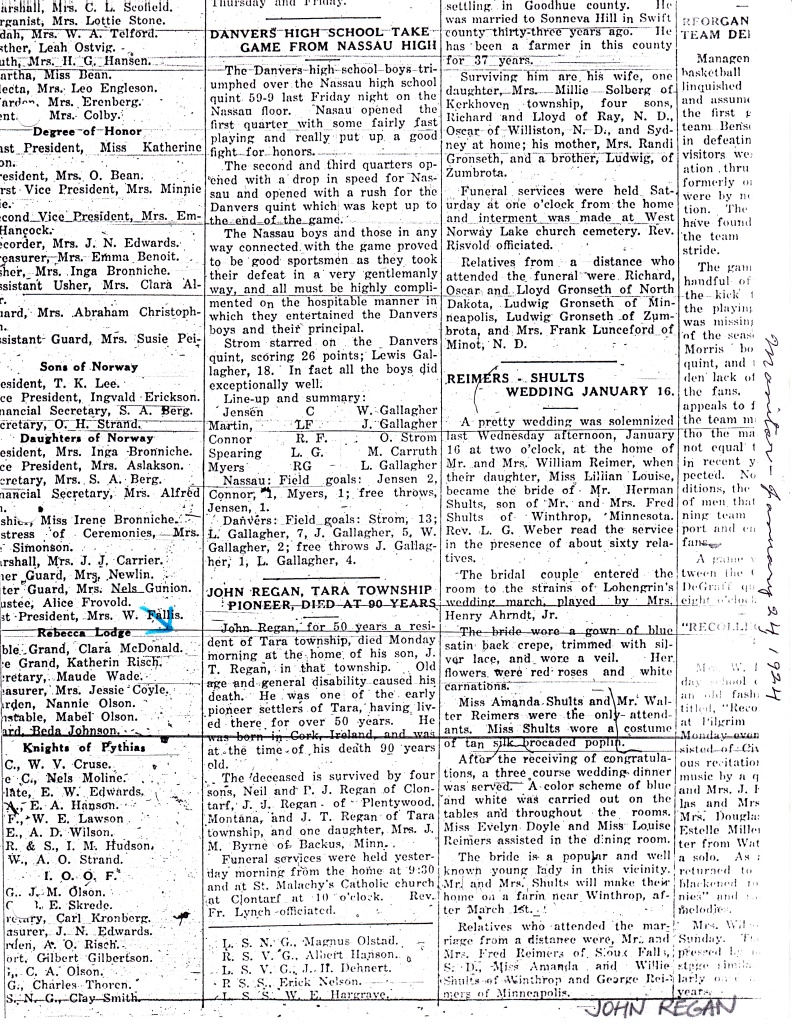 John’s obituary is near the bottom