“I’ve never heard that! Why didn’t grandma ever tell me that story?”

I have to admit, when my older sister Regan says this, as she does from time-to-time, I feel a tinge of satisfaction. Younger sisters will understand how years of childhood rivalry can spill over into adulthood and we briefly allow ourselves to revel in the tiniest of victories. A card game won, a promotion at work, or in my case, a story my grandma told me.

But, as the ever-modest younger sibling, I shrug and tell Regan it’s simple. She never heard the story because she never asked. I was constantly asking my grandma to tell me all about the “old days”, and a question like, “What was your dad like?” (and a few key follow-ups) often lead to an afternoon of unearthing memories and revealing truths. Like this…

Thomas Edward McMahon, my great-grandfather, was born on June 13, 1879, in Tara Township, Minnesota. Tom was the second child and eldest son of Francis and Catherine (McAndrew) McMahon. His father was a native of County Fermanagh and his mother was born in New York – her parents came from County Mayo in the 1850s.

My grandma was Agnes McMahon Regan, Tom’s youngest daughter. Grandma said her dad was warm and generous. His family and friends could depend on Tom to be there when they needed him. No one was better in a crisis. Grandma smiled when she said that in the end, her dad was at heart, a big kid. He loved to play with his children and his easy manner lead to lots of jokes and laughter. Tom enjoyed nothing more than sitting in his chair in the evening, surrounded by his family as his wife, Mary, read aloud from Treasure Island or Little Women or whatever novel the mobile library offered that month.

Tom wed Mary Foley on June 9, 1904, at St. Malachy Catholic Church in Clontarf, Minnesota. The couple grew up a mile apart on farms in Tara Township and were childhood friends. Tom’s nickname was “Hoosie” and Mary was “Minnie”. They had seven children – four girls and three boys.

Grandma said her dad was so good-natured, he never raised his voice.

“Never?” I asked. A natural question.

“Well…there was one time…” And we’re off.

The family was at the table for dinner when my grandma (who was about four-years-old at the time) said to her dad, seated next to her, “Gimme the butter!”

Tom was startled by his daughter’s demand. “Pardon me?”

Grandma said it again, this time louder, since he obviously didn’t hear her, “GIMME THE BUTTER!”

Tom was taken aback. None of his children behaved so rudely, not even his spirited middle child, Rose. But he was especially surprised by the outburst from Agnes. Tom told her she could have the butter if she asked for it nicely.

Grandma thought about it for a moment and said, “Gimme the butter!”

Tom had heard enough. He stood up and ordered Agnes to leave the table immediately. Grandma stormed out of the kitchen and threw herself on the seat of the buggy outside. She cried like she had never cried before. A short time later, Tom came out to Grandma. He set her dinner on her lap and placed his arm around her shoulders. Grandma said she apologized profusely. Her dad brushed the black curls from her forehead and dried her tears with his handkerchief. “There, now, that’s the girl. You’re alright…”

The two of them sat on the buggy while Grandma ate her dinner. She still felt terrible, but she had learned her lesson. Looking back, Grandma thought her dad felt as bad as she did that he raised his voice. He never did it again. And Grandma learned some table manners.

More I learned about Tom McMahon… 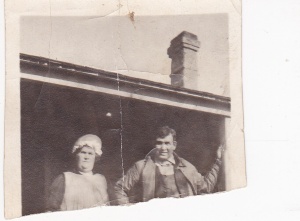 According to Grandma, her dad was a true farmer. He loved everything about the process – preparing the soil, planting, growing crops, harvesting them, and sharing the fruits of his labor. Unfortunately, the 1910s and 1920s were tough on many farmers on the prairie of Western Minnesota. Tom tried to make a go of it several times. He sold the homestead and moved to rented land, farming until 1926 when he gave it up for the last time. The McMahon family moved to Minneapolis to begin life anew.

In the city, Tom worked at the pole yard, treating and preparing new telephone poles.  When he retired, a neighbor allowed Tom to use a nearby vacant lot for a garden. Tom returned to what he loved. He grew enough produce to trade with the local shop for groceries and feed his family and neighbors. He had never been happier.

Tom McMahon died on May 6, 1937. His wife, Mary, came home after a rare afternoon away from home to find him peacefully in his chair, rosary entwined in his fingers. A heart attack took him quickly.

Listening to Grandma’s memories of her loved ones brought them to life for me, and at the same time allowed me a glimpse at my grandma. I never had the privilege to meet my great-grandfather, but I feel like I know him. I was lucky to know my grandma. Now it’s my job to keep and share my grandma’s memories and her stories for the rest of the family. You just have to ask.

If you aren’t by nature as nosy as I am, these sites might help you think of what questions to ask…

3 thoughts on “Gimme the Butter”