Indeed, it is. Another summer nearly over. But, nearly is the operative word. There is still time to knock a couple more titles off your summer reading list. Regan (my sis) and I started reading Pete Hamill’s Snow in August and I am really enjoying it so far. Order it up and join us…click here, less than $7 on Amazon. 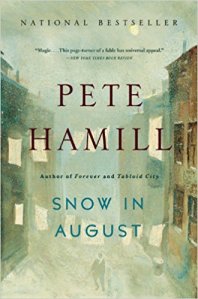 Snow in August takes us to Brooklyn (we’ve been there a lot this summer!) For a change of pace, this novel gives us a male perspective on 20th century Irish American life. The novel opens in December 1946 with eleven-year-old Michael Devlin waking up in the apartment he shares with his mother. That’s all I am going to say. I don’t like when people give things away about books. Isn’t that why we read them? To find out what happens? Click here to read the proper New York Times review.

Regan and I are reading Snow in August at the same time so it will be nice to talk about it as we go. I missed that with the last couple of books which we read alternately.  That doesn’t make for much of a book club, now does it?

Here’s a list of the books I’ve read so far this summer. You will notice a couple of non-Irish-America-related titles. I took a bit of a detour last month. This list begins with the most recently read book.

What I liked most about this book was that Donohoe’s characters felt real. Sometimes they bugged me and I sighed and rolled my eyes at their decisions. Other times I was surprised by their bravery, commitment, and compassion. It’s just how I feel about my family and friends. I also appreciated the way she structured the book and was very consistent in weaving the elements and generations together.  We were given a backstage pass into the world of the F.D.N.Y. and it was fascinating and heartbreaking. Really enjoyed this book.

The Catcher in the Rye by J.D. Salinger.

I loved Holden Caulfield when I read this for the first time at age fifteen, and I love him today (many years later). If you haven’t read this for a while, do it. Holden mentions that his last name is Irish and his dad used to be Catholic when he talks about how “Catholics are always trying to find out if you’re a Catholic.” (p.125)  So many good quotes and insightful observations from Holden. Holden is definitely near the top of my “all-time favorite characters” list.

At Weddings and Wakes by Alice McDermott.

When I finished this book and noticed it was published in 1992, I could not understand what took me so long to read it! I fell in love with this book on the first page. McDermott’s writing is beautifully subtle, but she doesn’t try to be mysterious. Bits and pieces of each character reminded me of some old relative in my own Irish American family (those I knew as well as those I’d only heard stories about.) So much felt familiar…like how Lucy never left her aunties without a bag of stuff.

This memoir has nothing to do with Irish America, but Kim is an old friend of mine. She should be proud of herself for this book. I know I am proud of her! As I read it, I felt like it was 1994 and I was sitting at a crowded table at Chang O’Hara’s, drinking beers and listening to Kim tell us a story. Those were good times. The origin of this memoir is a one-woman play Kim produced following her experience meeting and interviewing Iraqi refugees. Kim met a special refugee and brings us along on the bumpy and confusing road of loving through language and cultural barriers. Well done, Kim. I wish Chang’s was still here…I’d buy you a beer!

This was a delightful family memoir in which Patricia Reilly Giff explores her Irish heritage. She took the stories she had heard throughout her life and set out to learn details of the real events in her family history. I know the feeling of pouring over census records and passenger lists, looking for something – anything – familiar. What Reilly Giff learned, I will leave it for you to read. There is usually more to the story that Grandma tells…we just have to figure it out! This is currently a real bargain at Amazon…cute hardcover volume for less than $5 would make a great gift…click here. 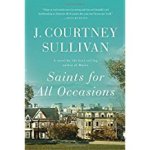 Saints for all Occasions by J. Courtney Sullivan.

I just got a copy of Will Murray’s King Kong vs. Tarzan and I think that’s going to be an awesome way to close out the Summer of Irish American Reads! I’ll update you on what we thought of Snow in August… 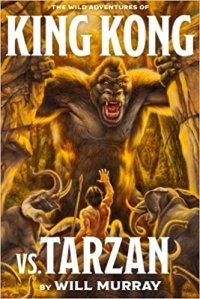 Let me know what you are reading and if you have any suggestions for great Irish American book. Leave a comment or send an email to TheIrishInAmerica!