Seamus Hora is so kind as to share another lovely poem with The Irish in America. This time he remembers winter evenings of days gone by, the 1950s when all you needed was a radio for company and a turf fire for warmth. Seamus thought there might be a few TIIA readers out there who also remember the “old days” in rural Ireland and might care to reminisce along with him… 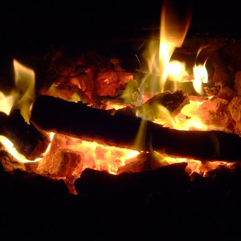 Photo courtesy of the fantastic blog – That Curious Love of Green – check it out by clicking on the image.

Tonight I am reminiscing

I have turned back the years

Removed the locks from both the doors

And forgot about my fears.

Removed the TV from the shelf

And put it out of sight

Replaced it with a radio

Commentating on a fight.

Put the mobile phone on silent

Took the handset off the wall

Neighbours foot steps in the hall.

Reached up to the fuse board

Reversed the on off handle

Got an empty bottle from the press

And placed in it a candle.

Replaced the coal and briquettes

And a couple sods of well dried turf

Harvest from the local bog.

The lid from off the oven

I will heat until just right

Wrap in a woollen sweater

Place in the bed tonight.

Stare out through the window

Watch the snowflakes as they fall

And Santa’s sure to call.

Will I read a passage from the book

Or the rosary instead?

Then go outside – melt a little snow

Before I go to bed.

Click here to learn more about poet, Seamus Hora, and to read his poem on the day John F. Kennedy was assassinated.

Last November 24th was the 50th anniversary of the assassination of President of the United States John F. Kennedy. Many people took a moment on this anniversary to remember where they were when they heard the news.

We recently received an email from Seamus Hora from County Mayo in response to our blog post. He sent along a wonderful poem he wrote describing “where I was when I learned of the sad news of the tragic passing of President J F Kennedy.” 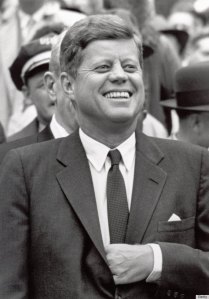 In my mind I see him clearly

As he stood inside the door

We sat and gazed in silence

At the sad news that he bore.

We all were fascinated

By this man from USA

Honoured by a visit.

For a country to be proud of

You must make an effort too.

He promised as he left us,

He would return again someday

But a sniper from a window

Sadly had the final say.

We had no television

But felt that we were there

For coverage was provided

By the great Michael O Hehir

I was playing bingo

The clock had just struck ten

Seamus Hora was born in Gorthaganny, County Roscommon. He has been employed by same company, Delaneys Ltd in Ballyhaunis, County Mayo, for 44 years. He has lived in Ballyhaunis for the past 20 years. Seamus is married to Rosaleen and the couple has one daughter, Sandra. Seamus only recently started to write poetry. and he bases his poems on his life experience. He values feedback and would like to hear what people think of his poem. Please leave a comment!

Thank you, Seamus, for sharing your poem! Stay tuned to the blog for my profile of Monica Wood, the author of the beautiful memoir, When We Were the Kennedys, later this month. You will also have the chance to win a copy of the book!