This morning, at the Cathedral of Saint Paul just up the street, is the funeral of Irish American writer Vince Flynn. I’ve purchased many of Flynn’s political thrillers over the years, but never read one. Since the late 1990s, Vince Flynn provided me with a “sure thing” when it came to buying gifts for my dad. Dad would always offer the book to me when he was finished. I declined every time – not a big fan of thrillers.

My dad knew “Vinnie” since the mid-1980s. Dad was an assistant football coach at the College of Saint Thomas when Vinnie was on the team.  Since I didn’t really like football, anytime I went to the games, I found other ways to pass the time. One way was to look at the game program. As I perused the roster,  I paid special attention to the players with Irish last names. And there certainly were lots of them!

At one time, I could have told you what number any given player wore during the period my dad coached at St. Thomas, but that was a long time ago. Vinnie could have been #89…not sure.

So many people I know love Flynn’s books. They rave about his story-telling and great characters. Even my mom, whose literary preferences lean heavily toward Jane Austen, jumped on the Vince Flynn bandwagon. I guess it is about time I see what all the fuss is about this Mitch Rapp…

When I hear the Cathedral bells ring later this morning, I will think of the Flynn family. The world may have lost a great writer and the Irish American community is less one proud member, but his family lost a beloved son, brother, uncle, husband, and father. 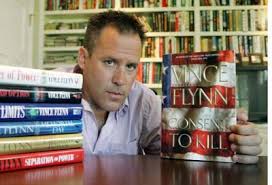 We are featuring a few more great Gatherings this week. Whether you are a Tobin, a Coughlan, or a football enthusiast, there’s a Gathering just for you! If you need help planning your trip or your time in Ireland once  you get there, we can help. Just visit our Tours page for information.

On June 2nd, a gathering of The Tobins of Sheepshead will be held. Everyone with a connection to John Tobin and Mary Spillane, of Caherurlagh, Sheepshead, Kilcrohane, West Cork is invited. John and Mary were married on February 4, 1836. There are a lot of Tobins from Sheepshead, so Danny Tobin (who submitted this listing) would like to give a particular shout-out to the Malllory Tobins.

Several of the Mallory Tobins made the journey to America over the years, and Danny is looking for any of the American branch to get in touch with him. So, if you think you might be descended from the Tobins of Sheepshead, County Cork, let us know you are out there!

Calling all descendants of Daniel Coughlan and Bridget Reilly who were married on the February 11, 1870 in Ballydehob North, West Cork! On August 4th is the gathering of the Coughlans of Ballydehob.  There is already a large group of descendants from the East Coast of America planning to attend, and Danny is hoping that some family from the West Coast will make the trip as well.

END_OF_DOCUMENT_TOKEN_TO_BE_REPLACED

Wanted to get an expert opinion for this post, so I called on Matt McCormack to share his thoughts on the history of a great college football rivalry, eighty-five years in the making. Notre Dame and Navy meet for the Emerald Isle Classic on September 1st at the Aviva Stadium in Dublin. Who will you be rooting for?

Often times, great rivalries in sport are predicated on a certain doubt as to the outcome of the game.  This has not been the case when the University of Notre Dame and the United States Naval Academy take to the gridiron.  Since the series began in 1927, the Fighting Irish and the Midshipmen have met a total of 84 times with Notre Dame on top at the final whistle of 72 of those games.  This September 1st, when the two teams face off, it will not be a run-of-the-mill game.  With a strong tradition behind it, the Notre Dame v. Navy game is always a highlight for both teams, but this season there is a little something special – this year the teams, and their fans, will cross the Atlantic for the Emerald Isle Classic at the Aviva Stadium in Dublin, Ireland.

Ahhhhh, Ireland – Notre Dame will clearly have the “home field” advantage.  I mean, they are the “Fighting Irish” after-all.  Pull out your Gaelic-English dictionary for a translation of “Notre Dame” and you’ll find… nothing.  Wait – nothing?  Isn’t Notre Dame in Irish University?  Trinity College, American Campus?

The University of Notre Dame du Lac is actually a centre for higher learning founded in 1842 by Father Edward Sorin, a French priest of the Holy Cross Congregation.  The name, which translates to The University of Our Lady of the Lake, pays homage to the Virgin Mary.  So if it’s a French school – why not call them the “Fighting Francs” or the “Fleur de Lis”?  Well, first off – I don’t think that Fleur de Lis t-shirts would sell very well – but they weren’t thinking about merchandising rights back then.  Early in the history of the athletic programs at the university, they were known as the “Catholics” or the “Ramblers.”

According to the Notre Dame Athletics website, there are a few different stories regarding the origin of the Fighting Irish moniker.  The story I like best is this:

Another tale has the nickname originating at halftime of the Notre Dame-Michigan game in 1909. With his team trailing, one Notre Dame player yelled to his teammates – who happened to have names like Dolan, Kelly, Glynn, Duffy and Ryan – “What’s the matter with you guys? You’re all Irish and you’re not fighting worth a lick.”

Notre Dame came back to win the game and press, after overhearing the remark, reported the game as a victory for the “Fighting Irish.”

So what makes this game so special?  Well, I think that the Irish Board of Tourism will find the 35,000 Americans attending the game special.  The Gathering 2013, a yearlong celebration of Ireland, its people and its connections, is sponsoring the game.  TheGatheringIreland.com puts it this way:

The Gathering Ireland 2013 is about the people of Ireland throwing open our arms and inviting anyone with a connection to our country to come and visit.

In other words – we’re going to do what ever we can to get anyone to come to Ireland for his or her vacation.  And it’s working.  It is estimated that the Emerald Isle Classic could mean $100 million to the Irish economy.  Of the 50,000 fans that will be in attendance in the sold-out Aviva Stadium 35,000 will be American, up from 10,000 when the same two teams played in Dublin in 1996.  The day after the game will be the busiest day ever at Dublin airport.

So, in just a few days the 2012 NCAA College Football season will kick off for Notre Dame and Navy, the 85th meeting in the longest continuous inter-sectional rivalry in college football.  Regardless of the outcome, at the final whistle, one of my favorite moments will take place; you see, not only is this a great & fierce rivalry, but it is a rivalry built on respect.   When the game is over, the Midshipmen will gather in front of their classmates for their alma mater, and standing right behind them will be the Fighting Irish – showing respect and support to the young men and women who have committed to serve and protect their country.

Matt McCormack has worked in collegiate and professional sports for twelve years. He is currently Director of Brand Marketing and Communication with the Minnesota Swarm of the National Lacrosse League, where Matt oversees all external operations. Before the Swarm Matt worked for three years at the University of Notre Dame.