Lately, I’ve been thinking a lot about my Great Aunt Dodo. Ever since I opened my hall closet and a vintage overnight case tumbled down from a high shelf, hit me on the head, and landed a few feet away.

It is a pretty cool old bag – black with a zip-top, dome-shape and two handles. There is a small window on the front of the bag where the owner could slide a slip of paper with their name for identification purposes. “Rose Oien.” Rose was Dodo’s real name and Oien comes from her husband, Bernie Oien, whom she married in 1955.

I love this photo of Dodo. It is from the early 1940s. Rose Ann McMahon was born on December 28, 1908, in Tara Township near Clontarf, Minnesota. She was four years older than my grandma and the middle of seven children. How she came by the nickname Dodo, no one could ever tell me. Nicknames are sometimes like that.

Dodo always seemed like an old woman to me, with thinning white hair, printed cotton muumuus, and sensible black shoes. And it was always “Dodo and Bernie.” I don’t think I ever remember Dodo without Bernie, and I saw them fairly often when I was growing up. Bernie didn’t do anything to make Dodo seem less old. I could never really understand what he was saying. And Bernie had a wooden leg.

Bernie lost his real one in an elevator accident. It was a long time before I realized it was a grain elevator accident. I had always pictured the doors closing on Bernie as he just makes it into the elevator car. One of his legs stays behind in the lobby, pinched off in the heavy outer set of doors while the rest of Bernie keeps going up and up…

“Don’t be silly, Annie. That couldn’t happen,” I remember my mom saying when I mentioned something about how Bernie lost his leg.

Dodo and Bernie were married later in life and didn’t have children. When I was a kid, I thought that was the only reason people got married, so I asked my grandma why Dodo married Bernie.

“I guess Dodo wanted to go to a wedding.”

When I think about Dodo, I will now always picture her as she is in this photo, with nicely styled hair, a regular dress, and that great smile.

As a single woman, I find myself drawn to the stories of the single women who populate my family tree. We see those conspicuous spots where the branch just stops. Sometimes these nubs result from the early deaths of  infants or children, but often they are the result of men and women who (gasp) never married nor had children.

Many of these men and women lived long meaningful lives, but with no descendants to keep their stories alive, they’ve been forgotten over the years. It is no wonder – I read somewhere the best people can hope for is to be remembered for 80 years after death.

In this series I am going to introduce you to some women I have come across in my family history research. They are daughters, sisters, aunts and great-aunts who deserve a little bit of attention.

I am straying a bit from my basic family tree for my first selection, Catherine Theresa Foley born in Minneapolis, Minnesota on September 17, 1884.

My great-grandmother was Mary Foley before she married and said she and Catherine Foley were “shirttail cousins”. Catherine’s nubby branch would only appear on the most comprehensive of my family trees, but I often heard references to Catherine and her family by my grandma and her sisters.

A more technical explanation of the shirt-tail cousin relationship follows – it’s a bit convoluted and boring. Personally, I like “shirt-tail cousins” better! Catherine’s parents were John Foley and Mary Casey, both born in Macroom, County Cork. My Foley great-great-grandparents (Patrick and Mary) were also born in that area of Cork, and once they immigrated to the United States, they lived in Fisherville, New Hampshire. So did Catherine’s parents. From what I can surmise, John Foley and Patrick Foley were first cousins.

Mary Foley married Thomas McMahon and the family farmed in Clontarf, Minnesota until 1924 when they moved to Minneapolis. My grandma’s sister Rose McMahon (known as Dodo to her family) worked for Catherine Foley in Minneapolis in the 1930s.

According to census and city directories, Dodo worked as a “housekeeper” at the Foley house, located at 1329 East 22nd Street in Minneapolis. Catherine’s father was a County Sheriff who had done quite well for himself.

The idea of Dodo as a “housekeeper” always made me chuckle. She didn’t seem the housekeeper type to me. Grandma said she spent most of her time lounging under trees, napping and eating apples, rather than doing her chores on the farm. I wondered how much work got done for Catherine Foley!

Although growing up I heard her name quite a bit, I know very little about Catherine. She was a musician. She gave private piano lessons and played the organ at Holy Rosary Catholic Church in Minneapolis.

Catherine seemed to have excellent taste (or at least similar to me!) My favorite table-cloth is a woven Jacquard floral – red and piney green, which came to me from Catherine’s house via Dodo. I also have a wooden box with enamel decorated flowers on top that was Catherine’s. It is very fancy, lined in a padded pink satin. I wonder what treasures she used to keep in the box?

I enjoy those items, but perhaps Catherine Foley’s most important legacy to my family was her house at 1329 East 22nd Street, or simply, 1329. When Catherine died in 1937, Dodo and my grandma bought the house from Catherine’s brother. It became Grand Central Station for the McMahon family.  Everything happened at 1329 – from ping-pong matches at the kitchen table to my grandparent’s wedding reception. Many memories were made at 1329.

A few months ago I sent for Catherine’s death certificate. I was curious. Catherine died on September 30. 1937. Cause of death was a coronary thrombosis. She had an enlarged heart as a result of 11-years with endocarditis. She was just 53-years-old. I suspect she kept Dodo around as much for her company as her housekeeping skills. I can just hear Dodo laughing in this photo!

Rose McMahon: Not your typical housekeeper

I wonder if there are any Foleys out there – descendants of John Foley and Mary Casey? It would be cool to hear from you……

The story goes that my great-grandmother, Margaret Mary Flannery, put the Christmas goose in the oven, then stepped into the side room and delivered her own special Christmas present. My grandmother Agnes Anastasia Celestine Flannery was born on December 25, 1915 in the house on Bayless in Saint Paul, Minnesota. 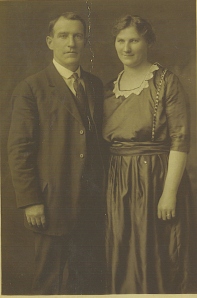 I always felt sorry for Grandma. Of all the days to be born, she had to share a birthday with Jesus. I loved my birthday because in my family it is something that is all mine. It is the one day where I get all the attention – all the presents, a cake with candles, and a special song sung just for me. (Is it obvious that I am a middle child?)

There are some people for whom a Christmas birthday would be a problem, but my grandma didn’t seem to mind a bit. She loved everything to do with Christmas — the music, the parties, the pageantry. She felt honored to share her day with Jesus, and enjoyed the special attention her December 25th birthday garnered for her.

I remember my aunts would make a birthday cake and we would light candles and sing “Happy Birthday” after Christmas dinner. We even gave Grandma a special present wrapped in birthday paper. But you know, even without theses special efforts, I think Grandma carved out a tiny bit of the Christmas festivities her personal birthday celebration.

On the last Christmas/Birthday we celebrated in 2004, I asked Grandma to tell me her favorite Christmas carol. I knew the answer, and it was difficult for Grandma to speak because of a stroke, but I just wanted to see the twinkle in her beautiful blue eyes when she said it.

Happy Birthday, Grandma. This one is for you…