Philadelphia is full of things which photographs (and words) do not do justice – the Liberty Bell, the seventeenth-century residential street Elfreth’s Alley, and the steps scaled by the iconic film character Rocky Balboa are just a few of the sights one really needs to experience in person to fully appreciate.

But, until you all can get to Philly, I will share some of the photos from our trip last week. Let’s begin with a few of Regan’s snaps at the Irish Memorial.

The story of the Irish Memorial. 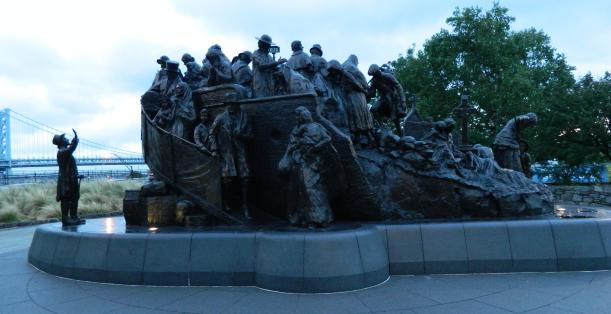 I love this poem by Peter Quinn, located at the memorial.

The Irish Memorial is a beautiful tribute to our Irish ancestors and a poignant reminder of their struggles, tragedies, and triumphs.

Next time I will share some more about the wonderful city of Philadelphia – a city it only took me a few days to fall in love with!

I am always on the look-out for interesting resources for researching the Irish in America. This week I learned of a fantastic collection of art and literature devoted to Ireland’s Great Hunger – An Gorta Mór.

The Quinnipiac University collection contains over 700 rare volumes (both Famine-era accounts and present-day scholarship) as well as archival records and visual arts. Check out the this introductory video to learn more about the collection.

The most interesting feature of the collection is available to view online: the minute books of the Killarney Union Workhouse have been scanned and transcribed, providing a glimpse into the operation of an Irish workhouse during the Famine. Included are four years (1845-48) of the weekly meetings of the Board of Guardians.

A scanned image of the meeting minutes (PDF) is accompanied by an abstract of the business conducted. In some ways, the minutes read like those of any other organization. The abstracts typically contain:

But then you read the discussion of setting a boundary to the workhouse land nine feet beyond the “dead house” and about the “violent and disruptive conduct of a pauper named Ellen Connell, who tore the clothing issued to her, and who, it was feared, would corrupt the female paupers with whom she would have contact” (July 9, 1845) and you are reminded of the grim realities of life in the workhouse. Ellen’s fate is contemplated by the Board in subsequent weeks and at one point she is placed in the Idiot Ward.

There is much information to be found in these minutes. You can see how the British government addressed the Famine through the letters from the Commissioners which are read at the meetings. These letters give instructions to the Guardians on how to operate their Workhouse in accordance with the Relief Laws of the time.

These minutes are valuable to the genealogist or family historian since many names are mentioned in the minutes – inmates, Guardians, local craftsmen, and Workhouse employees. If your ancestors came from the Killarney Union, perhaps you will come across a familiar name? Some examples:

When the Killarney workhouse opened in the Autumn of 1845, it was months before the first inmate was admitted. By April 19, 1847 there were 900 paupers at the workhouse and the Board held a special meeting to proclaim that no more would be admitted that day. By April 15, 1848, there were 1243 inmates at the Killarney workhouse, occupying the dormitories, makeshift infirmaries, and converted sheds and outbuildings.

Interested in a workhouse in your ancestor’s part of the Ireland? Click here to find a comprehensive list of workhouses located in Ireland during the 19th and early 20th centuries.

Special thanks to Regan for telling me about the An Gorta Mór collection at Quinnipiac University!