Can you guess what Mr. Hogan’s occupation was? If the name doesn’t give it away, I bet his picture will: 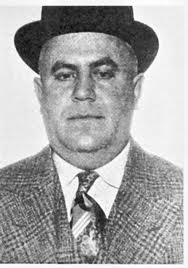 Yeah, you guessed it. Dapper Dan was a gangster. But not just any gangster, the “Irish Godfather” of Saint Paul, Minnesota. I am in no way condoning organized crime, and it’s not like I really have a “favorite” figure of the underworld, but I think it is important to show how Irish Americans have had influence in just about every facet of life in the United States.

Dapper Dan came to Saint Paul, Minnesota in 1908 and quickly connected himself to the corrupt police department and political machine. He was a major player and was both “feared and protected” by the police. Wikipedia explains how it all worked:

Known as the “Smiling Peacemaker” to local police officials, Police Chief John “The Big Fellow” O’Connor of Saint Paul allowed criminals and fugitives to operate in the city as long as they checked in with police, paid a small bribe and promised not to kill, kidnap, or rob within city limits.

The Justice Department called Dapper Dan “one of the most resourceful and keenest criminals” in the country. Armed robberies, money laundering, bootlegging, illegal gambling, and murder were some of Dapper Dan’s interests. He also owned the Green Lantern saloon on Wabasha Street in downtown Saint Paul – a saloon, casino, speakeasy during Prohibition, and more.

On December 4, 1928, Dapper Dan was the victim of a car bomb. The Streets of Saint Paul describes his lavish funeral:

The respect that Dan was shown in life was even shown during his death. It was reported that over twenty five hundred people came, along with two hundred automobiles to mourn Hogan. There were over five thousand dollars worth of flowers from Underworld bosses in New York, Chicago, and the Twin Cities adorned his casket at his funeral. A six foot high wreath was placed near the casket, with a large ribbon with the words “Our Danny” stretching across it. A who’s who of both the city official and crime world attended the funeral, with former middle-weight champion Mike O’Dowd being one of the pall bearers. Even the underworld was taken aback by his death and went dark for a short time as a tribute to Hogan. “Somehow, one would rather be in Mr. Hogan’s place than that of his murderers” preached Father Nicholas J Finn at the funeral.

This was a fascinating period in American history, and one in which Irish Americans played a role. Not one most people would be proud of, but history is not always pretty.

Next time I visit some of our family graves at Calvary Cemetery, I might have to look for Dapper Dan’s final resting place. His headstone might be tough to miss.