The “mystery” from last time was actually solved a few years back.  My mom reminded me that we confirmed the identity of the priest when we compared the photo-pin to a photograph of Father John J. Molloy that we found in the book Meet Shieldsville, by Mary L. Hagerty.  I spaced this discovery out, and I must admit that this was not entirely an accident.  At times I become overwhelmed with my own family history research, and when a discovery opens up a new can of worms and I don’t have the time or energy to deal with it, I will slip the cover back on and vow to deal with it at a later date.  This is precisely what happened with good old Father Molloy.

Above is a reproduction of the photo of Father Molloy.  It is not of the highest quality, but I think you can appreciate the resemblance to the photo-pin on the right.  My great-grandmother worked as Father Molloy’s housekeeper (1905-1910) before she was married.  While I was pleased to learn the identity of the priest, it meant that there was even more to learn about Father Molloy.  The first thing I wanted to know was how Annie came to know Father Molloy.

John J. Molloy was born in County Mayo, Ireland and educated at St. Patrick’s College Maynooth, County Kildare.  He was ordained in 1891 and arrived in Minnesota later that year.  Father Molloy served as an assistant pastor for a number of parishes throughout Minnesota before settling at St. Patrick’s in Shieldsville.  He served the community for fifty-two years.

All of that was well and good, but I couldn’t find anything in the biographical information on Father Molloy that could point to a connection to my great-grandmother.  That was until I read in his obituary that he was survived by one sister named Delia in Manchester, England.  Immediately I  thought of the dozen or so photographs taken in the studios of Manchester, England that Annie had saved.  Of course, none of the photographs were identified, but I assumed they were of family members.  Annie had one sister who moved to Manchester and raised a family (Bridget) and another sister who lived there for a few years before returning home to Kildare (Catherine, who I have mentioned before.)  Manchester could be the connection, but it made my head hurt and I told myself I would tackle this another day.

I believe the day has come.  It is time to dust off my Manchester file and see if I can’t figure this one out.  A wonderful book, The Reynolds Letters, provides considerable insight into the lives of Irish emigrants living and working in Manchester during the 19th and early-20th centuries.  I will use the resources available on ancestry.com and elsewhere on the internet to see if I can learn anything more about a possible Molloy-Hill connection in Manchester.

Here are some of my of mystery Manchester photographs… 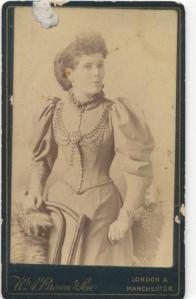 Probably one of the Hill girls...

The Hill sisters that I believe spent time in Manchester are:

If anyone has experience researching Irish emigrants in England, specifically Manchester, please let me know.  I will keep you posted…