Names etched into walls by Black&Tan soldiers at Donaghmore Workhouse

But in the case of Donaghmore, it makes perfect sense. The workhouse opened in 1853. By that time many of the Irish who suffered the effects of the Great Famine (1845-59) had already died or emigrated. The workhouse remained open until 1886. The Black and Tans (British soldiers in Ireland) used the workhouse as a barracks in the early 1920s before the Donaghmore Co-operative Society established the Donaghmore Creamery in the workhouse buildings in 1927. 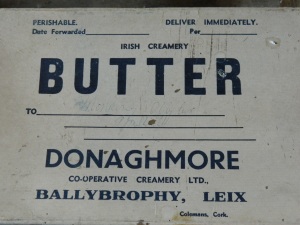 The Co-operative donated two workhouse buildings to the community, and in 1988 a committee of volunteers was formed to renovate, interpret, and manage the buildings.

Our tour guide in October was Liam Phelan who explained that the workhouse buildings were so well-preserved because they were used, but not altered, for so long by the creamery and the Co-operative Society. This also explains why the displays of farm machinery and implements fit right in at the workhouse.

Original door to the girls' dormitory

There are several panels throughout the museum that address specific topics related to the workhouse. The one below discusses emigration. 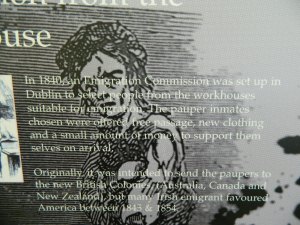 What longtime Donaghmore Creamery employee and current Rathdowney resident was also a member of the 1949  Leinster Hurling Championship and All-Ireland runner-up teams?

The first person to leave a comment with the correct answer will win a special prize!

For more information on workhouses: