The first time I visited Ireland in 1988, I was struck by the number of derelict farmhouses dotting the countryside. “Why doesn’t someone just tear those old houses down?” I wondered. “That’s what we do in the good ol’ USA…we don’t leave houses to fall down on themselves. If we don’t want or need them, we get rid of them and build something new and better…”

This sentiment came from a teenage girl from the city who spent more time in the countryside during six weeks in Ireland than she had in sixteen years back home – in the “good ol’ USA”. I thought I was so smart…

Fast-forward twenty years and I am closer to home, driving the country roads of Tara Township, crisscrossing its thirty-six square miles in Swift County, Minnesota. My maternal great-great-grandparents were among the pioneer 1870s settlers of this township on the vast prairie of Western Minnesota. This was my first visit to Tara. I had traveled three thousand miles from home on a number of occasions to visit Ireland, my “ancestral homeland”, yet I had never bothered to drive a few hours west to see where my people settled when they came to Minnesota.

Granted, as far as vacation destinations are concerned, Ireland is a bit more attractive than Western Minnesota, but it turns out, the two places have some things in common.

There are the obvious similarities in place names in this part of Minnesota. Bishop John Ireland established several colonies of Irish Catholic settlers with names like Avoca, Kildare, Tara, and Clontarf. Hundreds of Irish families from cities and communities in the Eastern United States seized the opportunity to own land and live in a community with its own church and priest, surrounded by fellow Irish Catholics.

The Depression came early to rural communities and persistent crop failures and changing farming practices combined to make farming unviable for most small farmers. My relatives moved to Minneapolis, as did several other Tara families. Some of the original Irish settlers had left Tara even earlier, moving further West, always in search of better land.

So, I wonder why I was surprised to find this in Tara Township?

On nearly every section of land in the township stands an abandoned farmhouse, or at least a grove of trees planted by the original settlers to protect a house. And this in the “good ol’ USA” where we tear things down!

Folks in Ireland and Tara Township have the same reaction when I ask them why they don’t simply tear down the abandoned houses. They shrug and say that they are no bother and they can be used for storage. That is the practical response, but I wonder if there is something a bit more sentimental lurking beneath?

The abandoned houses got me thinking…A similar hopelessness that drove millions of Irish to America during the 19th and 20th centuries could be seen in rural Americans who fled the farm for the city in the 1920s. Major difference, of course, is there was not a famine like Ireland experienced, however there was tremendous poverty, crops failed miserably, families were split up, and life changed permanently and dramatically.

I am rather ashamed of my sixteen-year-old self for not being as smart as she thought she was. She should have realized that the same reason this stands today in Ireland… 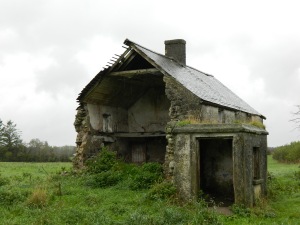 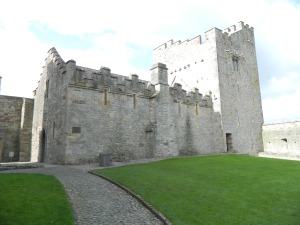 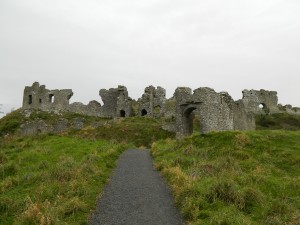 are still here today. I doubt that the farmhouse ruins will have the staying power of the castles and abbeys of centuries gone by, but in the meantime they can remind us from where we came. Whether it is a farmhouse in Ireland or Tara Township, Minnesota.

Now, if I could only get Jimmy to fix up this old house…

7 thoughts on “This Old Farmhouse”