I had a few more questions for our favorite Irish American, Maureen Teahan Murray. Maureen immigrated to Lawrence Massachusetts just about sixty-six years ago this month. She and her sister Joan left Milltown, County Kerry, Ireland in November 1947 and arrived in the United States just in time for Thanksgiving. Read the story of her auspicious arrival – click here. A full list of links to earlier Meet Maureen entries, as well as her delightful stories of growing up in Milltown follows this article. 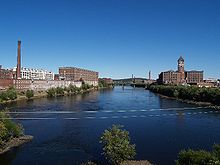 What was the biggest adjustment you had to make to life in the US?

Our biggest adjustment to life in the U.S. was waking up at 4:30 AM to eat breakfast and make our  lunch for work. We crossed the bridge in S. Lawrence, MA over the Merrimack River on bitter winter mornings. Finding it more comfortable to keep moving the 20 minutes it took to walk rather than stand waiting for the bus that would take us to the Wood Mill Factory.

Maureen worked in the “English Drawing Room” at the Wood Mill for a year-and-a-half. Here’s how she describes her job:

The men placed large wool bobbins on a frame and we pulled the wool fibre down onto smaller bobbins and secured them then started the machine. That filled even smaller bobbins of wool. Then the men removed them and we repeated the process. Someone else worked with the wool after we were finished preparing it. 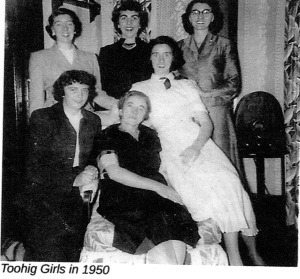 Did you make friends with mostly other Irish/Irish Americans? Was that important to you?

Most of our new friends were Irish American-many first generation American born, but we didn’t seek them out. A few months after we settled in Lawrence I had to have an appendectomy. Dr. Frank McCarthy had a private clinic there and his receptionist was Mary Toohig. When I was in the hospital before the operation he told me he would send someone to see me. While recuperating, I was surprised to meet Mary and her sister, Ann. I expected medical professionals were coming to check on me. Still medicated at first I thought I was dreaming when I met the Toohig sisters. They were from a family of eight and their parents were both born in Skibereen, Cork. Almost sixty-five years later Mary is still one of my best friends. 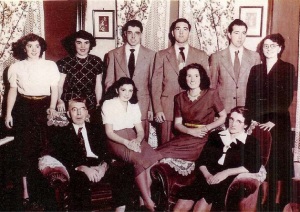 Early on, what/who did you miss most from Ireland?

Family we left behind were sorely missed when we first came here. My father, and brothers and sisters, Kitty, Dolly, Helen, John and Donal. Also, our grandfather Teahan who lived on the farm in Lyre, Milltown. Eventually, Kitty, Dolly and Helen joined us in the states. Donal tried living here for a year but then went back to Limerick.

Although new friends made in America couldn’t take the place of family left behind in Ireland, friends like the Toohigs helped make Lawrence, Massachusetts feel a little bit more like home. Do you have any questions for Maureen about her immigration experience in America? Leave a comment!
Click on the following titles to read more about Maureen and her memories:

Stay tuned to the blog for Maureen’s next story, coming soon!