I visited Clonmacnoise for the first time in 1988. I stayed with the Walsh family of Ballinasloe, County Galway for the “family stay” part of my summer study program. They brought me to the monastic ruins on the River Shannon in nearby County Offaly. 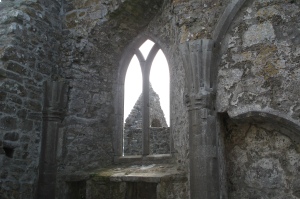 Later that summer when I had returned home from Ireland, I remember my Grandma McCormack asked me to name my favorite thing about my trip. I told her Clonmacnoise. I didn’t realize it was my favorite until she asked. There is just something about the place, something more than the round tower and chapel ruins. Those are a dime a dozen in Ireland. Clonmacnoise is very special, and I have been back many times in the past twenty-five years.

Regan has taken some really cool photos at Clonmacnoise over the years, but sadly most were captured before she entered the digital age, so they are relegated to photo albums. Compiling this series of my favorite things has proven to me that I must scan all of our old photos! That might be a great project for next month.

Several of my great-great-grandparents were born in Kilmichael Parish, County Cork. I first visited the area in 2009, and I fell in love with the rugged landscape. The photo above is one of my favorites. It is taken from the Kilmichael Ambush Memorial. The memorial is on the site of the 1920 confrontation during the War of Independence where seventeen RIC soldiers were killed by IRA forces led by Tom Barry. Read more about it here. 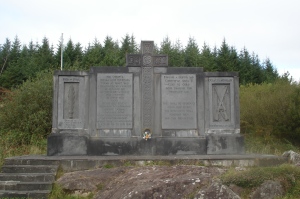 Father Jerry Cremin, then Kilmichael parish priest, guided us around the parish on a drizzly October day. We walked through the thick, wet grass in the cemetery full of ancient gravestones. Fr. Cremin pointed out the grave markers without inscriptions. He said some had eroded, but others were never marked. What good was an inscription when the deceased’s loved ones could not read? They identified the graves by the stones themselves and their placement.

My ancestors left Kilmichael a long, long time ago. I am attracted to the place for its stunning landscape, but also because it is the birthplace of these brave individuals. Ultimately Patrick Foley, his wife Mary Crowley Foley, and John Regan settled on the prairie of Western Minnesota. I just wonder what they thought when they arrived on that flat, treeless expanse..just a little different from Kilmichael!

I love Cadbury Mini Rolls. Hands down, Mini Rolls are the best packaged snack cake in Ireland. American readers might think a Mini Roll looks just like a Hostess HoHo. They may look similar, but there is really no comparison in taste. These are Cadbury, after all! Delicious!

So, next time you visit Ireland and are stocking up on groceries for your self-catering holiday, don’t forget to pick up some Cadbury Mini Rolls. You will not be disappointed!

Album: When Justice Came by The Black Velvet Band.

The minute Regan came home from college at Christmas with this cassette tape (it was the late Eighties, after all) I fell in love with it. Regan saw The Black Velvet Band when they opened for 10.000 Maniacs. Those were the days of great music…

Hope you enjoy this song. It is definitely on my all-time Irish favorites list.

I love Irish cows. They are all over the Irish countryside – peeking over stone walls, lounging in pastures, and sharing the road with you as they are being moved from one field to another. 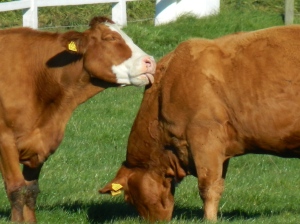 Our cousin Jimmy has cows. I guess technically he has cattle, but they are all cows to me…

I don’t get too attached to Jimmy’s cows.

When Regan and I were in Ireland in 1995, we fell in love with Irish butter and decided that it was so tasty because the cows were so big. We may have come to that conclusion over a few pints of yesterday’s favorite, but it made perfect sense to us. When I returned to Saint Paul, Minnesota after those three weeks in Ireland, I realized I never saw cows at home, so how did I know if Irish cows were any larger than American cows? Our theory had a few holes…

I love Guinness. Back in the 1990s when I started drinking it, there were only a few bars in the Twin Cities that served a decent pint. Lucky for me, Regan worked at one of them – Molly Malone’s in Minneapolis.

I had my first taste of Guinness in Ireland in 1995. It was so, so good. That year we visited the Guinness Storehouse in Dublin, saw the multi-media presentation, learned the fascinating history of the black stuff, and enjoyed our free pints at the end of the tour.

Over the past twenty years, the Guinness at home has improved tremendously as it has grown in popularity. Bars sell more of it so it doesn’t sit around as long. Still, it is tough to beat a pint in Ireland.

It may not be Ireland, but I suspect I will manage to force down a couple pints of Guinness tonight at The Liffey in Saint Paul. Happy Birthday to me… 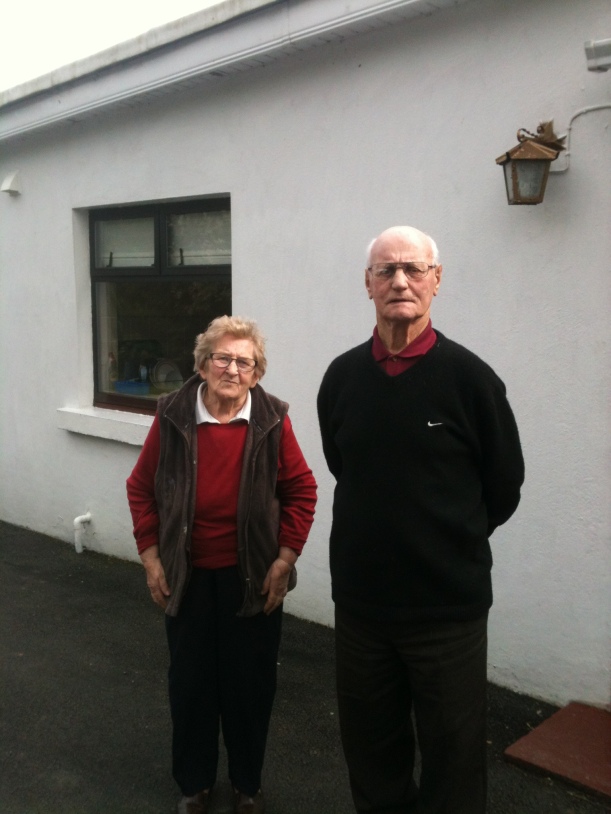 Paddy is my paternal grandfather’s (Bill McCormack) first cousin. I never knew my grandfather, so meeting Paddy and his wife Maura in 2009 was a real treat for me.

Paddy and Maura have been married over sixty years. Paddy was a member of the 1949 County Laois hurling squad, runner-up in the All-Ireland final to County Tipperary. He’s a local legend, and he has a great memory for stories of the old days. Maura is sweet, has a fantastic sense of humor, as well as a bit of a determined streak. When we visited last September, Maura had recently undertaken the large job of painting the outside wall, “It needed painting, the state of it!” They are just a neat couple.

Maura, Paddy, and their seven children (as well as their niece and nephews) have gone a long way to make my family feel welcome every time we visit. We are very lucky to have such wonderful family in Ireland.