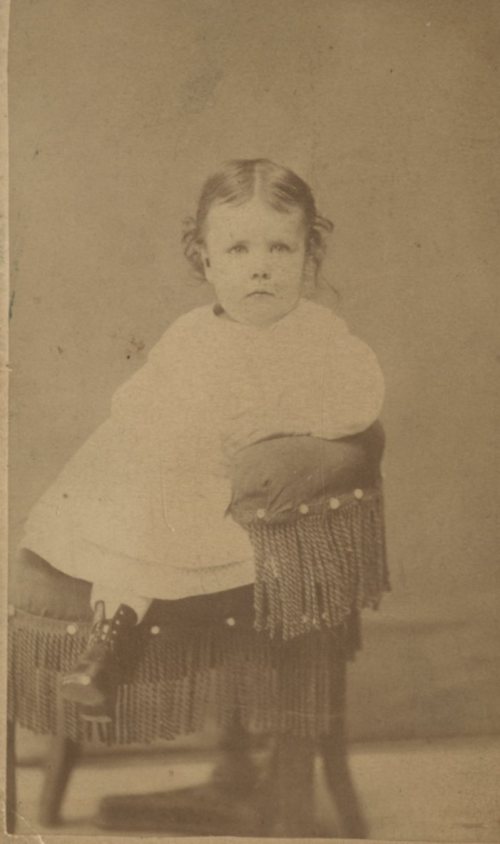 Minnie was my great-grandmother, and according to my grandma she absolutely hated the nickname “Minnie”. Please forgive me, Great Grandmother, but I think it is a cute name, and since your real name Mary is shared by at least 75% of the women in your family tree, I chose to call you Minnie.

Minnie Foley was born in Fisherville, New Hampshire on January 2, 1875. She was the fourth of five children born to Patrick Foley and Mary Crowley (their eldest son did not survive infancy.) Patrick emigrated to the United States from Kilmichael, County Cork in 1864. Mary came a year earlier in 1863, also from County Cork.

Minnie was baptized on January 24, 1875 at St. John the Evangelist Catholic Church in Concord, New Hampshire. John Foley and Mary Casey were her godparents.

Three years later, Minnie and her family moved west to Clontarf, Minnesota with several other Irish families from the Concord, New Hampshire area, including the Regan family. John Regan and Patrick Foley emigrated together in 1864 from Kilmichael. The families settled on farms in Tara township. Minnie and Nellie Regan were best friends from a very young age.

First-Generation American Girls: Minnie and Nellie in about 1886

My grandma told me that Minnie worked hard her entire life, and that included working on the family farm in Tara Township while she was growing up. Her sister Maggie worked inside, while Minnie and her younger brother Jackie worked outside. My grandma confessed, she wasn’t sure where Minnie’s older brother Tim worked!

The McMahons, an Irish family from County Fermanagh, lived about a mile from the Foleys in Tara. Minnie married Thomas McMahon at St. Malachy Catholic Church in Clontarf on June 28, 1904. Minnie’s sister Maggie and Tom’s brother Frank were their witnesses. I imagine Minnie and Hoosie (as Tom is referred to in Minnie’s autograph book) having secret meetings over hay bales and missing chickens during their courtship…

Minnie and Tom raised seven children and after giving farming all they had the McMahons moved to Minneapolis in 1925.

When she died in 1945, Minnie was living with my grandma, her husband John Regan, and their new baby (and my mother) Eileen. My grandma said that Minnie was smitten with Eileen. Minnie would say that she had never known a baby to sleep as much and as well as little Eileen. Minnie marvelled at how Eileen would even fall asleep with a bottle in her mouth.

In many ways things came full circle for Minnie. Also living with my grandma in 1945 was Neil Regan, Nellie’s older brother and my grandpa’s father. Eighty years earlier Patrick Foley and John Regan had journeyed to the United States. After Fisherville, New Hampshire and Clontarf, Minnesota, the families came together again in Minneapolis…a long way from Kilmichael.

In my grandma’s recipe book are a few recipes attributed to Minnie, her “Ma” – I think I will make “Ma’s Spice Cake” in Minnie’s honor today. 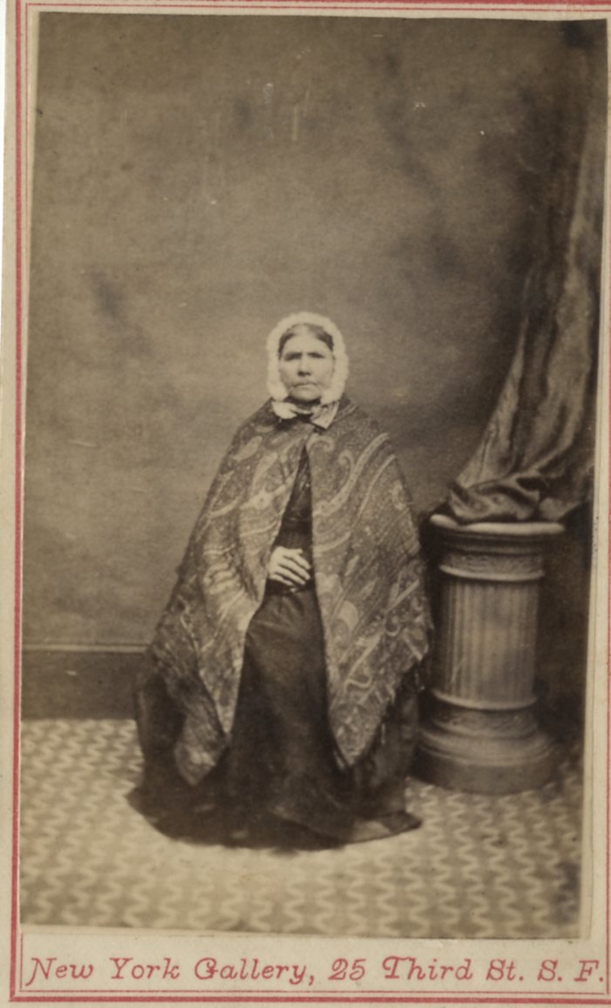 Unidentified from the Foley family collection

Several years ago, my mother received a trio of photographs from her cousin Lorna.  Lorna knew that two of the photos were her great-grandparents (see below), but she had no idea about the identity of the woman pictured above.  All that Lorna could offer was, “Well, I am sure she’s one of the Foleys…”

Do you think she could be this guy’s mother?

This is my great-great-grandfather Patrick Foley who arrived in America in 1864.  He came from Kilmichael Parish, County Cork and settled in Fisherville, New Hampshire before heading West to Clontarf, Minnesota in the late 1870s.

Or, could the caped woman be this lady’s mother? 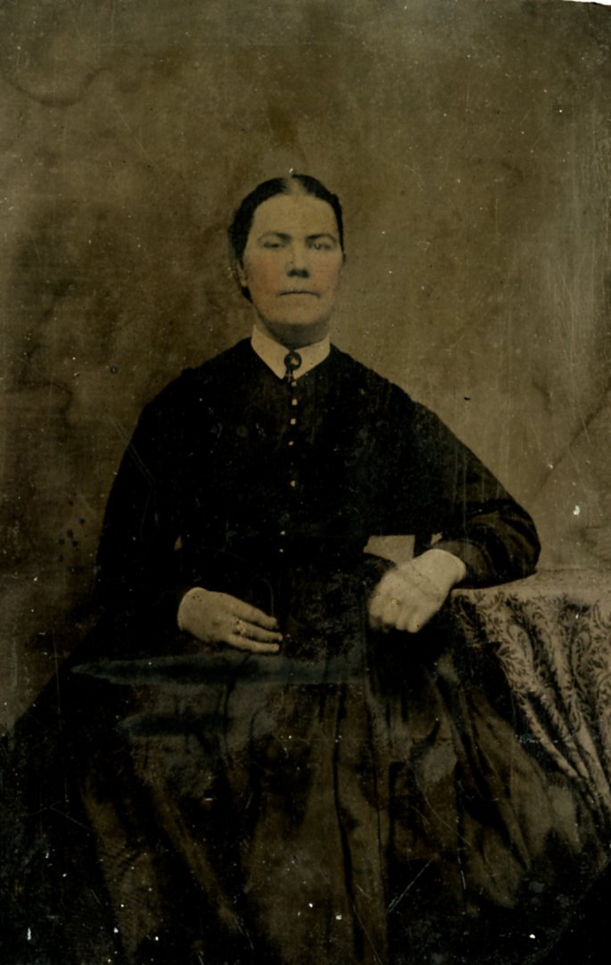 I really can’t tell who she is, nor do I know where the photo was taken.  If anyone has input or information regarding these photos, please leave a comment.  I would love to know more about the costume in the first photograph, and if you see any resemblance. 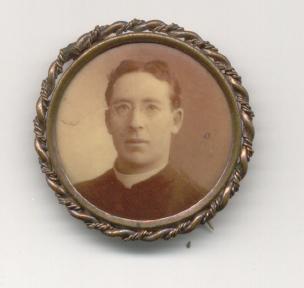 This “photo-pin” belonged to my great-grandmother Annie Hill Regan.  Annie passed away in 1937, and this pin was among a small collection of cards, photographs, and memorial cards that made their way to my mom.  Click here to see a 1930s Christmas card from Annie’s sister Katie in Ireland.

I remember seeing this pin as a child and being puzzled as to why my great-grandmother had such a thing.  Who wore a pin with someone’s picture on it, especially a picture of a priest?  I didn’t get it, but I was relieved that the fad of priest-photo-pins didn’t carry over to the 1980s – the thought of wearing a picture of my parish priest Father O’Sullivan stuck to my cardigan gave me goosebumps!

Several years ago I became curious about the identity of the priest in the photo-pin, and I started to ask questions…

I have never been able to answer these questions.  I know Annie had one brother, John, but I know nothing about his life, and I have seen photos of Father Molloy, but only as an older man and there isn’t a strong resemblance.

Maybe you can help me with the third question.  Has anyone come across an item like this, maybe in an old box of your great-grandmother’s treasures or at an antique shop?  The pin measures about two inches in diameter with a coppery, scalloped edge.  Leave me a comment if you have any ideas…

Check out this website for more on photo jewelry.

To one of my favorite Irish American couples…my great-grandparents Annie Hill and Cornelius Regan.  They were married 100 years ago today, February 21st, at St. Malachy Catholic Church in Clontarf, Minnesota.  Annie came from Kill Parish in County Kildare in 1899 and settled in Clontarf, Minnesota.  Neil was born in Fisherville, New Hampshire, his parents were Mary Quinn from County Clare and John Regan of Kilmichael, County Cork.

This photo appeared in the December 2008/January 2009 issue of Irish America Magazine.  The following text accompanied the photo:

In March 1864, boyhood friends John Regan and Patrick Foley from Macroom, County Cork, arrived in New York port on the City of Baltimore sailing from Cobh.  They took to life in America quickly and in 1870 both were married.  John Regan married Mary Quinn and they had four sons and two daughters: Cornelius (Neil) , Ellen, John, Patrick, Jeremiah (Jerry), and Mary.  Patrick Foley married Mary Crowley and the couple had four children: Margaret, Timothy, Mary, and John.  After 15 years at work in the mills and machine shops of Fisherville, New Hampshire both families seized the opportunity to move west, own their own land, and raise their families in an Irish Catholic community.  By 1880, the Regan and Foley families were established in Tara Township near Clontarf, Minnesota – active in township government, members of St. Malachy Catholic Church, and proud farmers on land they owned.

This photograph of the sons of John Regan and Patrick Foley – four first generation Americans – captures one of those moments in American history when anything seemed possible.  It is the turn of the twentieth century and Neil, Jack, and Jerry Regan and John Foley look poised to take on what the world had to offer.  Their confidence is palpable and represents the optimism shared by many Americans at the time.

Over the years, confidence waned as youth faded and the realities of life took hold.  This included falling crop prices, farm failures, personal hardships, and economic depression, but on the day this photograph was taken, with cigars pursed in their lips and hats perched jauntily on their heads, these four young men look as if the world is their oyster.

The Regans and the Foleys came together again in the next generation –  Mary Foley  was my grandmother’s mother and Cornelius (Neil) Regan was my grandfather’s father.

Since the photo was published, I have learned that Patrick Foley and John Regan came from Kilmichael Parish in West Cork.

My great-grandfather Cornelius Regan is seated on the left, next to John Foley.  These two men were members of the Ancient Order of Hibernians, a fraternal organization formed in 1838 largely in response to discrimination faced by Irish Americans throughout the country.  These types of organizations became very important for new immigrants from Ireland, as well as to more established Irish Americans.  More to come about these Irish American fraternal societies in a future post…