Memorial Day is in the rearview mirror, the school year is winding down and the air has turned heavy and warm…summer has arrived in Saint Paul! It’s time to assemble your summer reading list, hit the pool/beach/lake/air-conditioned living room, and start reading!

I plan on doing a lot of reading this summer so I thought it might be fun to start an Irish American Book Club here on the blog. I’ve never been much for the traditional book club. I like to discuss books as I am reading them. It’s hard for me to save up all my key points and insights for the monthly club meeting. I also don’t like the pressure involved in the typical book club – I don’t like people telling me what book to read and when to read it.

Make suggestions, give feedback. Here are a few guidelines:

Regan (my sis) and I got a head start and read Saints for All Occasions by J. Courtney Sullivan. It is a novel about two Irish sisters who move to Boston in the 1950’s. Immediately I thought of Maureen Teahan Murray, the lovely contributor to the blog who passed away last summer. Maureen came to Boston from Milltown, County Kerry in 1947. She and her sister landed in New York just in time for the Macy’s Thanksgiving Day Parade before heading north to Boston to begin their new lives. (Click here for more about Maureen and links to her delightful essays.)

I also thought about Colm Toibin’s Brooklyn, a book I loved. The movie was great as well, but the book was better. However, I put all of this out of my mind when I began reading Saints for All Occasions because I wanted to have an open mind. I didn’t want to compare it to a real-life situation or another novel.

Has anyone else read Saints for All Occasions? I would love to hear what you thought of it. I think it is a perfect summertime “beach read.” It is just over 300 pages and it goes pretty quickly. Regan and I discussed it as we read, carefully monitoring where the other was in the story as to not spoil anything. Leave a comment and let us know what you thought!

If you have book ideas or thoughts on Saints for All Occasions, tweet me @ainemccormack1…I’d love to hear from you!

I wanted to take the opportunity to share my Thanksgiving post from last year with you again. This was the first time I introduced Maureen Teahan Murray (of Meet Maureen and Maureen’s Memories fame). Maureen’s daughter  Mary had emailed me a day or so before Thanksgiving and shared the story of Maureen’s arrival in America just in time for the iconic Macy’s Thanksgiving Parade. Enjoy and have a happy Thanksgiving!

Macy’s Thanksgiving Day Parade debuted in 1924. Macy’s began the parade in order to promote their department store for the Christmas season. Most of the participants in the parade were Macy’s employees who donned costumes, marched, and rode on floats pulled by horses, tracing the route from Harlem to Macy’s Herald Square store. Over 250.000 people watched the parade that first year and it became an annual event. 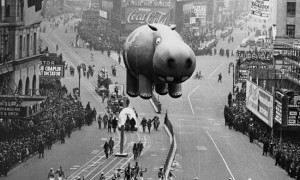 The famous helium-filled balloons of animals first appeared in 1927, replacing the real animals that were sprung from the Central Park Zoo to march in the parade. By 1942, the rubber and helium from the balloons became necessary for the war effort and the parade was called off until 1945.

The November 28, 1947 s New York Times article describes the parade in great detail. The parade had clearly hit its pre-World War II stride with crowds, bands, floats, and the return of the giant balloons. The headline reads:

CLOWNS ADD TO THE FUN

What a line-up! The two million spectators lined the sidewalks of the parade route and “peered from open windows, crowded roof-tops, and marquees” to catch a glimpse of Humpty-Dumpty, the Pumpkin Float, and a gigantic panda balloon. Five-year-old Katharine had this to say about the parade: “I like the Jack O’ Lantern, I like the Funny Cop, I like loud music, I like the dancers, I like everything.”

Among the two million people gathered that Thanksgiving morning in 1947 were Maureen and Joan Teahan. Maureen and Joan were sisters who had just arrived in New York the previous day, November 26th. The sisters left their home in Milltown, County Kerry about a week earlier to begin new lives in the United States. Milltown’s population? About 100 people.

The girls experienced just a bit of culture shock upon arrival in New York City. Their Uncle Dan sponsored the sisters’ passage to the United States and made a point of telling them to lock the hotel room door. Maureen recalls that this was something she and Joan had not even considered.

So, what did Maureen think of the two million people plus a rocket ship from Mars full of blue invaders who were “mocked” by Peter Rabbit and the Mad Hatter while the Three Little Pigs “sang the praises of Thanksgiving” and the steady pounding of drums filled the air? Maureen admits she was overwhelmed.

What an introduction to the United States for Maureen and Joan. They walked right into one of the most cherished Thanksgiving traditions for families all over the United States – the Macy’s Thanksgiving Day parade, on a day that is uniquely American. That is a lot to process within the first forty-eight hours in a country.

Maureen and Joan stayed in New York for a week – shopping and seeing the sights – before settling in Lawrence, Massachusetts.

In a couple of weeks, I will publish a lovely story written by Maureen. It’s a Christmas story. But for now, a Happy Thanksgiving to all and enjoy the parade!

Special thanks to Mary Power for sharing the New York Times article, as well as her mother Maureen’s memories of the 1947 Macy’s Thanksgiving parade.

Click on the following links to learn more about Maureen and read her delightful stories:

I received an email yesterday from Mary – Maureen Teahan Murray’s (Meet Maureen and Maureen’s Memories) daughter and collaborator – sharing their memories of the day President John F. Kennedy was assassinated. In recent days people all over the world are remembering that fateful day, November 22, 1963.

Nearly everyone (at least in this country, but elsewhere as well) remembers where they were when they learned that someone shot President Kennedy. I have heard many people say there have been two days like that in their lives: November 22, 1963 and September 11, 2001. Mary writes:

I had just turned eight when JFK was assassinated and like many people I remember the day vividly. That Friday I was in Miss Murphy’s second grade class at the Francis Parkman School, Jamaica Plain (Boston) . Although very young Miss Murphy was an extremely strict teacher so I was surprised that afternoon when she abruptly announced she was leaving us alone in the classroom. She told us to do our vocabulary homework which we usually would have done over the weekend.  It was so out of character for her I knew something was very wrong but I had no idea what it was and could never imagine the awful truth. When she finally returned she dismissed us without saying a word about the tragedy. I suppose they thought we were too young to be told and left that difficult task  to our parents.
END_OF_DOCUMENT_TOKEN_TO_BE_REPLACED