By now you must all know how much I love letters, so let’s take another look at the Stephen Owens Collection. Discovered at the Old Skerries Historical Society in County Dublin in the late 1970s by well-known Irish Emigration historian Kerby Miller, this is a small collection of letters sent from Stephen Owens of Clontarf, Minnesota in the USA to his niece Celia Grimes in his native Skerries, County Dublin, Ireland. The letters are from the first few years of the twentieth century.

I began to look at the letters of Stephen Owens in an earlier post (click here to get caught up.) I will pick up the action with a letter dated July 20, 1900.

Mr. Owens starts right out with the weather (typical Irishman and Minnesotan!) It is the hottest and driest summer in over twenty-five years in Minnesota. No rain and scorching heat have left the farmers with little in the way of grains to cut come harvest time:

Corn and potatoes are Pretty good but the American likes to live on flowers instead of potatoes.

Mr. Owens writes of his younger cousin, a daughter of his Uncle John, who works for a family in Lynn, Massachusetts. He had a letter from her in which she describes her employer and their summer holidays in New Hampshire. She wants very much to come out West to visit her cousin which leads Mr. Owens to write, “I would like to see all my friends before I Die, God bless us all.”

The next letter to Celia is dated April 1, 1902. Mr. Owens tells her of the new priest in Clontarf and how the beloved Father McDonald died of consumption. He goes on to tell Celia that she may miss her brother who recently left home for America, “but it is 49 years last February since I seen your Mother, my sister Eliza.” All those years later, Mr. Owens still misses his sister and family. He even misses Celia, and she was not even born when he was last in Skerries! 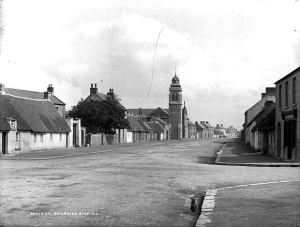 In a previous letter Celia must have told her uncle that there is something of an Irish language revival in Skerries because he writes:

Skerries is a great old Town. It is getting very patriotic. I am glad to hear the young People are learning their Country’s language. It is a good sign…

The last letter from Mr. Owens in the collection is dated November 10, 1903. The tone of this letter is less than up-beat. He has been ill for five weeks and sometimes is unable to stand for the pain in his back and legs.

Mr. Owens is pleased to hear that Celia was reunited with her brother who came back from America, and he comments on the latest wave of migrants from Ireland:

…you sent 11 people out from Skerries lately. Them is the kind that is wanting, Old People is only in the way here in America they don’t want them. I suppose it’s that way in every country…

Mr. Owens is clearly facing the fact that he has reached the twilight of his years and he has apparently given up the notion of returning to Ireland to see all of his old friends and family – “I think when we meet next it will be in heaven.” It was another two years before Mr. Owens passed away in December 1905.

I contacted the Skerries Historical Society to see if they had the originals of these letters – I only have copied transcripts. Maree Baker, the librarian at the Society got right back to me and said that they did not have the original letters. She sent along a couple of items from the Grimes family that are part of their collection – a photo from the late 1920s and two memorial cards. Celia’s brother James is on the left in the photo and Maree said Celia could be one of the women to the right. 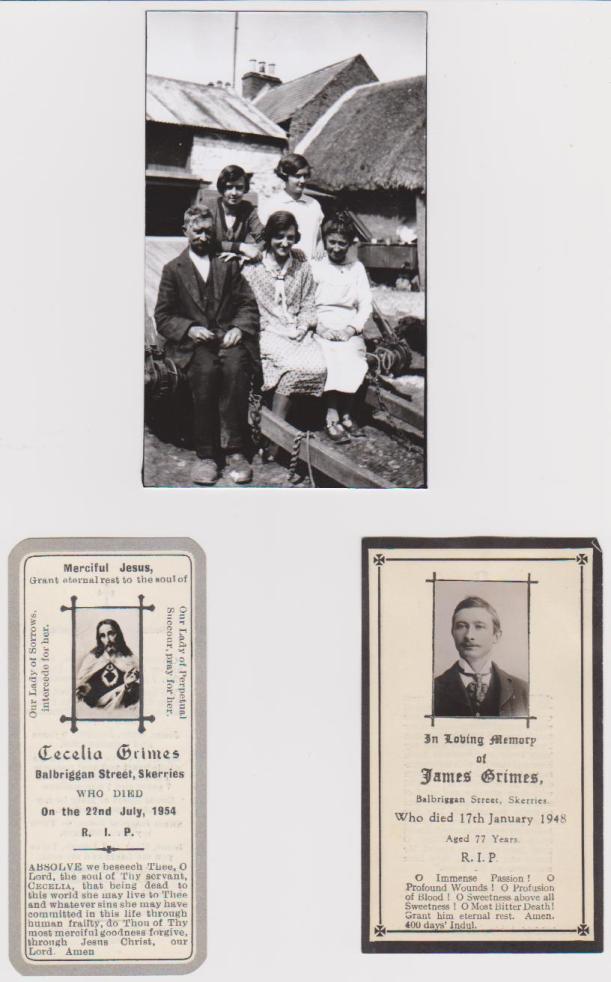 Grimes Family of Skerries (courtesy of the Skerries Historical Society)